Signs That Are Not Messing Around | 22 Words 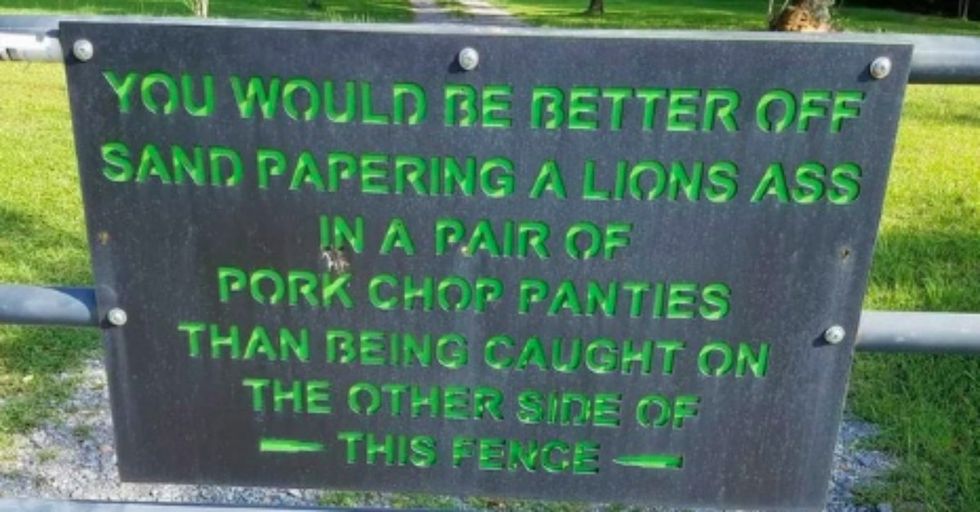 Signs That Are Not Messing Around

I just love when people's personalities come across clearly in the signs they write and hang up in public.

Below, we have 19 of the funniest, most clever and sassy signs we've ever seen.

The people who wrote these signs very clearly mean business. They don't have time for your nonsense.

This is a wordy sign that basically says: "Do not come onto my property or you will be sorry," but it's way more clever than that!

You did what now?

This is maybe a little much there, Gordos. Dial back the innuendo.

Happens to the best of us.

I wish I could teach my auto-correct that I never, ever want to say the word "ducking" unless I'm specifically in the middle of an Indiana Jones-like adventure where poison darts are being shot at my head.

Thank you for being clear about how cold it is.

Sometimes you're out walking in the cold, and you see a sign that says "burrr," and you go "these jerks have no idea how cold it is! Look at how much they skimped on the 'R's!"

Take that, you MTV reality show that peaked in cultural relevance in about 2002!

Sounds good to me!

There is so much confidence in the act of putting this sign out front that I have no choice to believe that woman on TripAdvisor was an absolute liar.

It's a much better plan.

You mash your head, you die. you mash potatoes, you're well on your way to a Thanksgiving feast to which you can invite all your friends. I know which one I'd rather do.

I actually did own a Chinese scooter for a short time — a Lance Duke Touring 250 — and it did nothing but break down. So I get it, Speed City. I'm on board.

I can't tell you how many times I've gone to a burger place, ordered a drink, and then had to go back up to the counter to buy myself a straw. Oh wait, yes I can. It's zero. Zero times.

See, this is why I avoid all three of those things.

Not sure about this for a toy store.

Having a funny, sarcastic voice is good for a lot of brands, but a toy store? Are kids going to pick up what these signs are putting down?

This will end badly.

The point of signs is to convey information clearly! No one should be expected to pull out a magnifying glass and examine the restroom signs. This is aggravated assault.

The only thing I want to make sure of, though, is this: does this new guy love him?

There is no way this sign isn't a trap. When poor tourists try to read it, they will absolutely be pick-pocketed. Run tourists, run!

This was this sign spelled "congratulations" reminds me of how my toothless, perpetually-sloshed granddad used to tell me he was proud of me.

With this earthquake detection kit, you'd never miss another earthquake again! (And not just because the googly eyes would move, but also because you would feel it and it would be very obvious.)

A real journey these two went on.

And now, with these pictures documenting the happiness and the heartbreak, we can feel like we went on the journey with them.

Now this is on-brand.

When your bar is called "Players," yeah, go ahead and have some fun. But imagine how this would play at a toy store? See what I mean abut how deciding on a comedic voice for your brand is a big deal?

I'll be honest with you: living is pretty much my favorite thing to do.

This is a funny bit, but I do think it would be very funny if the mom was actually very comfortable with her age and the son was grounded for something else entirely, like breaking into the teacher's lounge and stealing the money raised by the Photography Club.

It's signs like these that really bring into focus how terrible and toxic this society's relationship with alcohol really is. And yet, we will all still drink it a lot and have a great time while doing so.

A colloquial voice is always soothing.

This sign should also remind all drivers to pahk they cahs by the Havahd yahd.

And how would one train their dog to do that, exactly?

Sometimes, a joke is so gross you can't even consider it as a joke. This sign makes me want to go wash my hands and brush my teeth for the next six hours.

This is a dark one.

First of all, those few negative traits are not enough to dislike a cat this much. And second of all, the girlfriend will eventually see the signs anyway, right? Why even go through the trouble of making them? Just tell her how you feel?

Have you ever heard the phrase "a rich man doesn't have to tell you he's rich"? Well, the same can be said about haunted apartments. If they're truly not haunted, I would know not because someone said so, but because I wasn't being driven mad by those who passed on with unfinished business here on the mortal plane.

I was planning on having an emergency appendectomy here at this park, but I can always move it to another public park. No big.

The man said he wouldn't die of stubbornness, and are you going to argue with him? I'm sure not.

Imagine the unfortunate incident that led to this sign having to be posted. There's no way this worked.

This is what happens when you have brothers who've teased you your whole life pick you up from the airport. What did you expect? The next one gets mad respect from me.

In the world we're living in, the only appropriate thing to celebrate on July 4th is Will Smith.

Hold up. Let's take it back. If venus fly traps get triggered when there isn't a fly around, they'll start digesting themselves and die?! That's punk rock.

It's right there in the name. Coke Zero has zero sugar. Explain that, government.

So harsh. I love it. Dying alone is an appropriate punishment for littering.

As a girl who's spent many a minute in a guitar store watching her boyfriend while he tries to outplay the people around him, this sign makes me want to kiss my fingers like an Italian chef. The next sign is too clever for its own good.

You won't get away with it if you try to sue after hurting yourself on the rocks. They warned you. You didn't listen.

This is pretty convincing. Wouldn't want to take that risk.

Get your ID ready

They aren't going to be fooled by cheap ploys. No excuses. No exceptions for large honkers. Your ID must be shown.

Now this is a religion I can get behind. They have billboards, so they must be legit. The next one is just plain funny.

This hilarious sign was posted in a college's engineering lounge (which is apparently a thing).

These people know their audience. Also, everyone was wasted by the time they got through the doors.

"If you can read this, you are not a train." What about Thomas the Tank Engine?! He's pretty literate.

Amen to this sign. But also, I would do anything for a Klondike bar. Those things are delicious.

Wow, this sign is so real. Every kids' sports field should have one of these. Parents can be crazy, y'all. Share this with someone who needs a laugh!