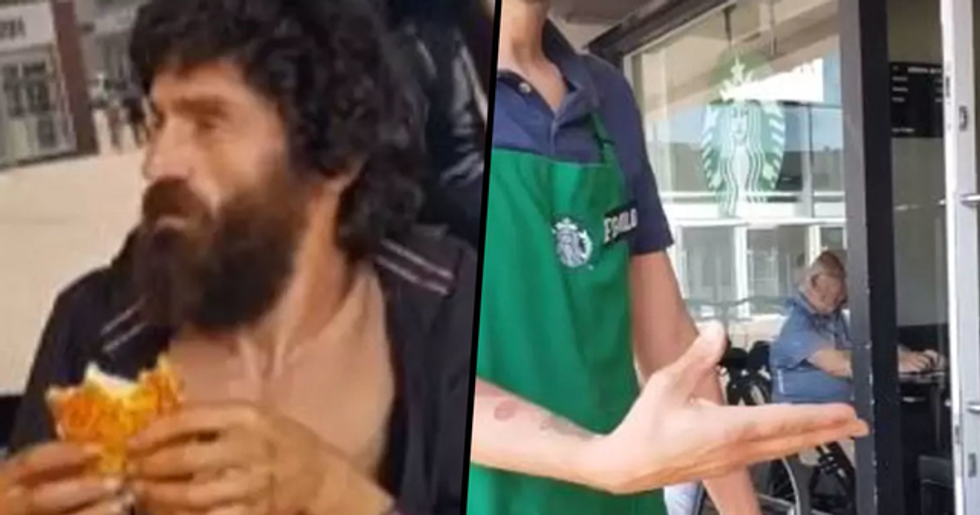 Appalling footage has come in from a Starbucks branch in Essex, England, that shows a member of staff and their repeated attempts to throw out a homeless man... Despite him being a paying customer.

After being posted on Facebook, the video quickly went viral, sparking outrage and disgust from people all over the world.

Keep scrolling to hear the full story and to watch the incriminating video, which sheds a light on the current state of our society.

A homeless person may even be invited to sit down and enjoy their food like any other normal person.

If it is paid for, a person, homeless or not, should be able to sit down and enjoy their food, right?

Well, according to Starbucks, they certainly cannot do that.

A Starbucks store in England has come under fire this week...

For trying to kick a homeless man out of their store after he had been bought food and drink.

A kind stranger had simply bought him something to eat and, like any regular customer would, he took a seat at one of the tables in their outdoor seating area.

But Starbucks clearly has a secret rule...

That you're only allowed to sit on their premises if you own, rent, or live in a house, apartment block, or any sort of building with a roof.

The incident happened in Essex, England.

In the video, the homeless man can be seen sat quietly at the table while he eats what appears to be a sandwich.

The barista can be heard trying to move him.

Though his face remains out of the view of the camera, the employee can be heard repeatedly insisting that the homeless man has to move and find somewhere else to eat.

The good samaritan who bought the man his food filmed the full incident...

And persistently argued with the member of staff, saying, "But he bought the food, he paid for that - I paid for that... If food is being paid and he's eating it - what is the problem?"
According to The Sun, the food was paid for by Sajid Kahhllon, who spotted the man scavenging leftover food on the tables.
He told the publication, "It was painful to see that someone had to search for food like that. I asked him if he was hungry and if he would like me to buy him some food. He replied 'yes', in a very weak voice."

The good samaritan assumed that the homeless man would be allowed to enjoy his lunch like any other normal person.

How wrong he was. "I bought him a sandwich and a chocolate cake worth £8.45 (roughly $10) so that he could eat respectfully. But as he was sitting there eating his paid-for lunch, one of the staff members went over to him and told him to leave."

And he continues to defend his actions, saying that if he let the man sit there, "he will keep coming back."

A security guard wanders over halfway through the footage...

And even she suggests that the barista simply leave the man to eat his lunch in peace.

And they all share the same opinion: Let the poor man eat his lunch in peace!

People were, quite understandably, outraged.

Many people were quick to call out Starbucks for the disgusting behavior of their staff.

And many praised the kind samaritan for sticking up for the homeless man.

"Heartbreaking to see, I am so glad that man behind the camera spoke up for him. Nice advert Starbucks!" One social media user wrote.

Though be warned, you may never want to shop at Starbucks ever again.

Starbucks have now addressed the incident.

And they have condemned the baristas actions. A Starbucks spokesman said, "The interaction on video is not indicative of the environment we strive to create." "We are looking into the circumstances surrounding this customer’s experience and will take appropriate action to ensure that our stores remain welcoming places for everyone. We want every customer to have a positive experience, and we apologize that we did not meet that expectation in this instance."