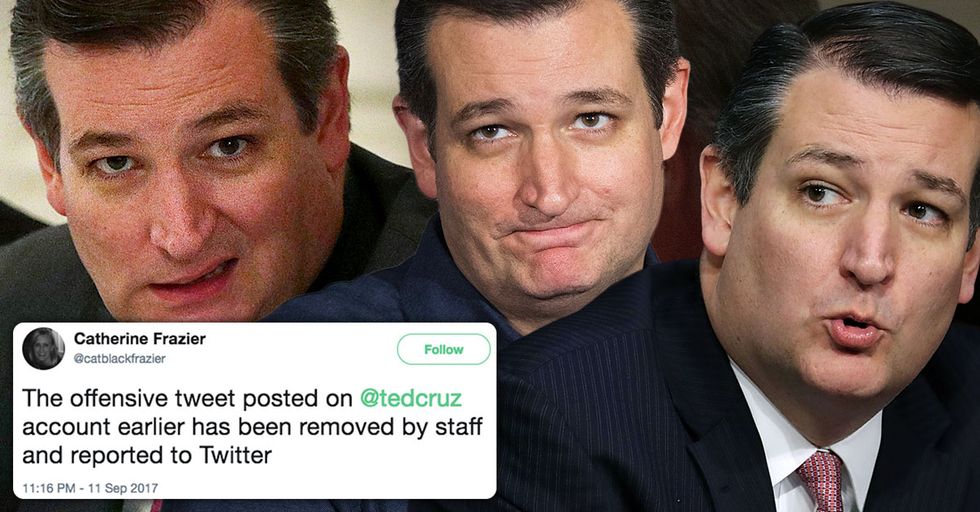 You might know Ted Cruz as a senator from Texas, one of approximately a gazillion Republican presidential candidates from 2016, or the Zodiac Killer.

The sad human turtle has been the subject of much political mocking — the man was already a walking punching bag before September 11, 2017 (yes, 9/11), on which day someone realized Ted Cruz's official Twitter account did something so hilariously inappropriate.

As a nation, we are no stranger to sexual scandals involving politicians.

Can you say "Donald Trump"? Whether he's grabbing women by the p***y or sexually assaulting young pageant contestants, he's a reliable lech.

And of course, there's old Bill Clinton himself.

No one will ever forget the sex scandal that rocked the presidency, made Monica Lewinsky a household name, and provided years and years of golden material to Saturday Night Live.

And now we have Ted Cruz.

The Texas senator now joins the ranks of his predecessors in the political sex scandal oeuvre. Perpetually unlikable and lonely Ted Cruz is finally part of a club.

It has since been removed and reported to Twitter by his staff, which makes it seem like they're trying to play this off as a hacking incident. What's much more likely is that Cruz himself was cruzing Twitter, forgot he was logged in to his big boy account, and hit the heart when he really shouldn't have. So what was that tweet that's got everyone in a tizzy?

Needless to say, this discovery had Twitter acting like a kid opening a box on Christmas morning that definitely has a puppy in it.

It's incredible comedy material for so many reasons.

Each and every Twitter response about Porngate is glorious.

That's quite a campaign slogan. If you compare it to his actual slogan from 2016, though, "Together we will win..." well actually, the themes are similar.

The hypocrisy is just so delicious.

Many were quick to point this out. But of all the amazing responses, there were a few from some specific people that absolutely take the cake. Wait 'til you see who else responded...

Mazin has never been shy about sharing his thoughts about the Cruzinator, so you better bet he had something to say about Cruz's old bunk bed habits. And then...

And then @SexuallPosts itself responded!

Let's not forget the day on which this happened though.

Most of all though, we're all just glad that Ted Cruz is finally opening up about these sorts of things.