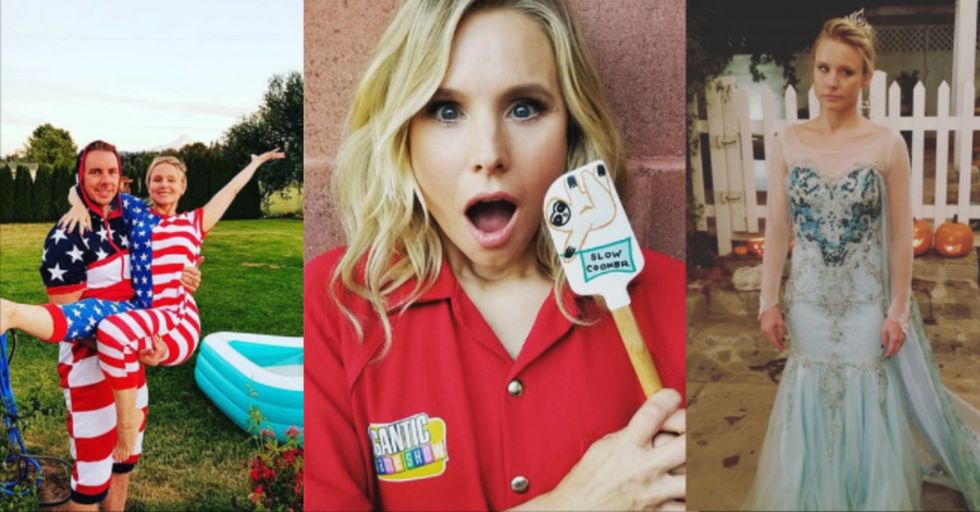 Kristen Bell's true fans have been loyal ever since her Veronica Mars days, but the rest of the world really joined the bandwagon this year. It was as if 2017 was the year that the whole world realized how hilarious, cheerful, and just so, so pure she's always been.

Here are the 20 things that happened this year that made us wish we were Kristen Bell's real BFF.

1. At the beginning of the year, she shared that she and her husband Dax Shepard have an obsession with the cult favorite board game, Settlers of Catan.

We have an obsession with Settlers of Catan! Celebrities! They're just like us! There's something so remarkably refreshing to know that your favorite celeb chills in the same way you do — even if they're playing Settlers after being at the Golden Globes and you're playing them after watching the Golden Globes on TV.

2. She also showed us we've been doing grilled cheese all wrong.

Look, it may not be the most delicious looking grilled cheese sandwich you've ever seen, but it's certainly the most colorful. Points for style.

3. She showed us how she and Dax celebrate the Fourth of July.

In patriotic onesie pajamas! If that's not exactly what our forefathers had in mind when they founded this great nation, then we don't know what the Fourth of July is really about.

4. When Hurricane Irma struck Florida in September, Kristen Bell went above and beyond to help out.

Bell got stranded in Florida right before the hurricane made landfall. She decided to make the most of a bad situation and do what she could to make things easier for everyone. Not only did she help collect supplies...

5. ...She also sang songs from Frozen to the people stranded at her hotel.

Thank you so much @IMKristenBell for stopping by and encouraging us with your beautiful voice and positive message!… https://t.co/kQaBA2VzIu
— Meadow Woods MS (@Meadow Woods MS)1505052807.0

There aren't a whole lot of things that make getting stranded in a hotel a more pleasant experience. But Kristen Bell singing to you is definitely one of them. And that's not all she did during the hurricane...

6. She also held down the fort and played bingo with the senior citizens.

All while drinking from a bottle shaped like her own Frozen character's head. She's truly on another level.

7. And besides singing to the senior citizens, she also sang with them!

Don't mind us; we're just over here definitely not crying our eyes out. In a year marked by natural disasters and sexual predators, it's incredible to see the light someone like Kristen Bell brings to the world.

8. Kristen Bell participated in an AMA on Reddit which taught us some pretty amazing things about the Good Place star.

So much so that they got matching haircuts. Come on! Both Kunis and Bell revealed this year that they waited until gay marriage was legal in the U.S. to get married themselves. They're just the best.

10. In fact, we learned quite a bit about Kristen and Dax's relationship this year.

Like the fact that at the beginning of their relationship they used to have super toxic arguments. Dax quickly put an end to that behavior and the two have since been the most delightful embodiment of #CoupleGoals that we've ever seen. But that's not all...

11. Back in August, Kristen designed a sloth spatula.

A SLOTH. SPATULA. (In case you weren't already aware, she is legit obsessed with sloths. Like, starts-crying-every-time-she-sees-one levels of obsessed.) Have we mentioned she's the absolute greatest? 'Cause guys. She totally is.

She and Dax Shepard have two daughters together who make messes just like any other kids. We love seeing examples of real life from our favorite ultra-famous celebs. It makes them seem more normal (and it makes us feel more glamorous).

13. For Halloween, one of her daughters made her dress up as Elsa from Frozen.

Even though she played Anna. What a cruel twist of fate! But the fact that she was willing to dress up as Elsa once again proves that Kristen Bell is a literal angel and we do not deserve her even a little bit.

14. Did you think Kristen Bell killed it with only one Halloween costume this year? NOPE!

She also dressed up as Tom Selleck's character from Magnum P.I. She got everything perfect, even down to the signature mustache. Incredible.

15. You might have missed this story of Kristen Bell trying to breastfeed during a meeting with film executives:

How? How does all this happen to just one woman? And how are we not already hanging out and swapping stories of kids making life so difficult?!

You may be awkward in social situations, but you'll never be "I accidentally propositioned Emmy- and Golden Globe-nominated actor" awkward. Only Dax and Kristen can rock that particular look.

17. Kristen Bell also got super real about a time her kids walked in on her and Dax having sex.

18. Dax later shared his own version of events, which made Kristen out to be even more hilarious.

We love how honest Kristen is about her and Dax's real life. Dax seems pretty cool, too. We will also accept him as our BFF.

19. Just this month, the two of them took their couplehood to the next level by renting out an entire roller rink.

You know, because they weren't already amazing and awesome and everything we've always wanted to be. They just had to go and do this, too.

20. Lastly, there's the fact that you can now actually hang out with Dax and Kristen in real life.

They're currently auctioning off a chance to win a holiday game night with them! We're betting they're gonna play Settlers. Because that's just how they roll.