Funny Stories for Anyone Who's a Tumblr Fanatic | 22 Words 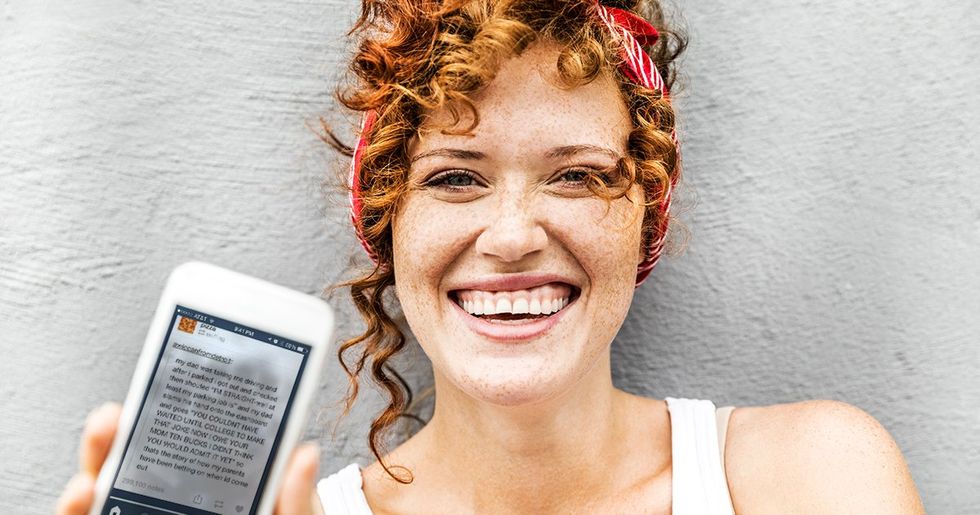 Funny Stories for Anyone Who's a Tumblr Fanatic

All I really want from the Internet is some funny tweets, adorable pictures of dogs (and cats!), and hilarious posts from Tumblr. OK, and maybe some pretty rooms to scroll through on Instagram and Pinterest while I dream about styling my own home someday when I am super rich and have a bunch of free time. Is that too much to ask?

If you desire the same things from your own corner of the Internet, well, I've got good news for you. I found a bunch of great stories that have been posted on Tumblr and collected them all here in one convenient place! Some are sure to make you laugh, while others might make you smile and tear up at how wholesome they are. Ready to read 'em? OK! Let's go!

I've had some tough jobs in the past, but I can say with almost complete certainty that I've never accidentally worked for the mafia. That's something this person's dad cannot say.

There are so many ways you could have answered that question without terrifying your young child. Why didn't you choose one of them?

Surround yourself with the kind of people who will cheer you on after finishing a 6x6x6x Rubik's Cube. Those are good people.

If my dentist said this kind of thing, I would probably actually go to the dentist. Heck, I might even floss.

I like to imagine these two becoming best friends, maybe even acting as Best Man at each other's weddings. All because they both decided to wear stripes on the same day.

i wish i had a story like that : tumblr from tumblr

I don't even want to think about the stories various families may be telling about me all around the country. I have a hard enough time dealing with the stories my own family tells about me.

Jim Carrey and the Dr. Pepper.

Somehow, this story perfectly encapsulates the very essence of Jim Carrey. Especially the part when he comes back and makes everything right. What a guy!

This would be way less embarrassing if your grandpa was named Harold or George. But it's much funnier this way.

If a chicken lays an egg in your lap, I'm pretty sure you are required to hatch it and raise the chick as your own. You are the Chosen One.

Living in a store.

I don't know what you're up to this weekend, but if you're looking for something to do, you can apparently live inside a store. You know. In case you're interested.

Looking out for yourself.

On the other hand, whoever you fall in love with someday is going to be very lucky because you'll probably pack secret snacks for them!

A story in three parts. Two of which maybe made me cry a little bit.

There's a lot going on here.

I'm pretty sure this is the definition of Chaotic Good.

You know the ice cream man was just waiting for the day to bust out the blue sprinkles. He chose the correct day.

Quick question. Is Guillermo Del Toro a great person, or the greatest person? I'm kinda leaning toward the latter.

There are a lot of good grandpas out there in the world. This guy is clearly one of the best.

I never knew I could find a picture of a deer carcass cute, but here we are.

This is the kind of story that restores people's faith in humanity. Good work.

First of all, good job showing your dedication to class. Secondly, punctuation! Use it!

What do you do in this situation? Show up to work in PJ's and watch Netflix all day?

I don't even really like shamrock shakes... But I suddenly have the urge to go to Arby's and get a mint chocolate chip shake right this very second.

This is indeed a power move of the highest order. I hope you're truly up for the challenge.

Almon Brown Stronger is my new hero. I aspire to that level of successful pettiness.

Somehow, Usain Bolt having a very fast tortoise is the only thing that makes sense to me anymore.

The Installation Wizard! : tumblr from tumblr

I've never worked in a lab before. But now I want to.

This is a very nice post. Also, I can't not read it in a dog's voice.

Honestly, if I end up in purgatory and it's just a bunch of gardening, I think I'd actually be pretty fine with that.

Most stories you read about the TSA are significantly less wholesome than this one. This one is just plain nice. Or should I say, "just plane nice"? Share this with someone who could use a smile today!