There's a Glitch in the Matrix, So Here Are 20 Strangers Who Look Just Like Each Other | 22 Words 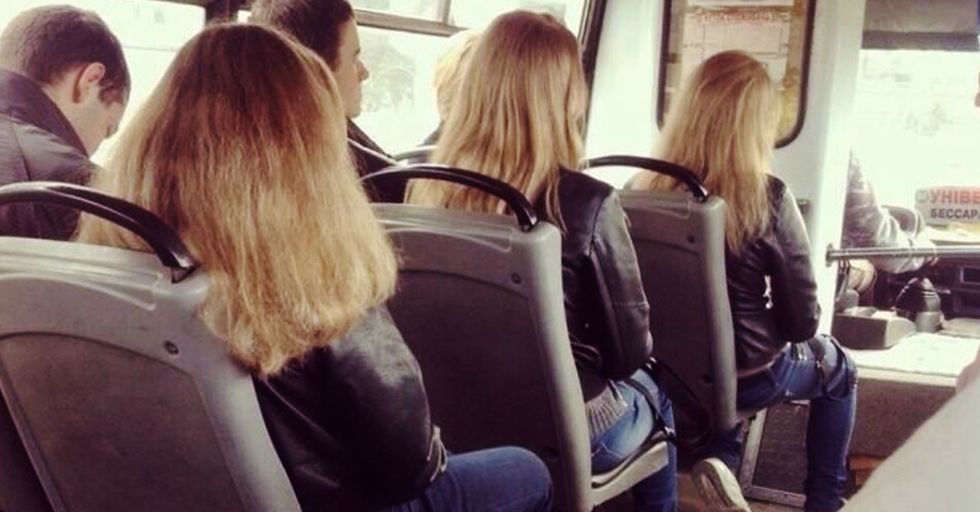 There's a Glitch in the Matrix, So Here Are 20 Strangers Who Look Just Like Each Other

You know how the entire world is virtual reality programmed to look like the real world by a group of sentient machine overloads who are merely using our human body heat as an energy source while we actually all exist in a deep sleep in a pod somewhere? Well, every once and awhile something glitches in the world that has been programmed for us and occasionally people are able to capture those moments and prove the existence of the sentient machine overloads and their evil plan. Or sometimes people just accidentally run into people who are wearing the same thing as them on the street. You be the judge with these photos of strangers who accidentally met their doppelgangers in public.

This woman went to a museum and spotted her exact lookalike.

The same color blue hair, same color scarf, and a similar coat. At least she can feel validated that she made a good outfit choice.

Do you think they even bought the same thing?

There's something very Truman Show-esque about this one.

They accidentally hired too many extras for this restaurant scene.

It's so embarrassing when you and the sidewalk wear the same outfit.

This woman's doppelganger is this stone path. One of them is going to have to change.

There's something off about these men sleeping on the subway...

They are wearing completely identical outfits and sleeping the exact same way, nothing to see here just the inevitable proof of machine dictatorship controlling our thoughts.

The airport has a uniform now.

TSA regulations are getting really extreme.

One of the machine overlords definitely got fired for this offense.

This is either a glitch or a Grateful Dead concert just let out.

It could also be just a normal day in Burlington, Vermont and/or Portland, Oregon.

A mullet glitch is the rarest of glitches.

Actually, anytime anyone has a mullet it's probably a glitch in the Matrix.

Could be a coincidence, but it is weird that they have the same backpack and are walking exactly the same way.

Right down to the red bag and the coordinated step!

This one is spooky.

Even their hair is falling out of their ponytails the same way.

They were both there to buy more green shirts and khakis.

When you meet your own glitch.

Well, that had to be eerie.

All of their hair is the exact same color and length.

What's even weirder is when they turned around they were both Larry David.

This one would be more impressive if 80% of men didn't own that exact shirt.

A glitch except for the socks.

Even cars are subject to glitches.