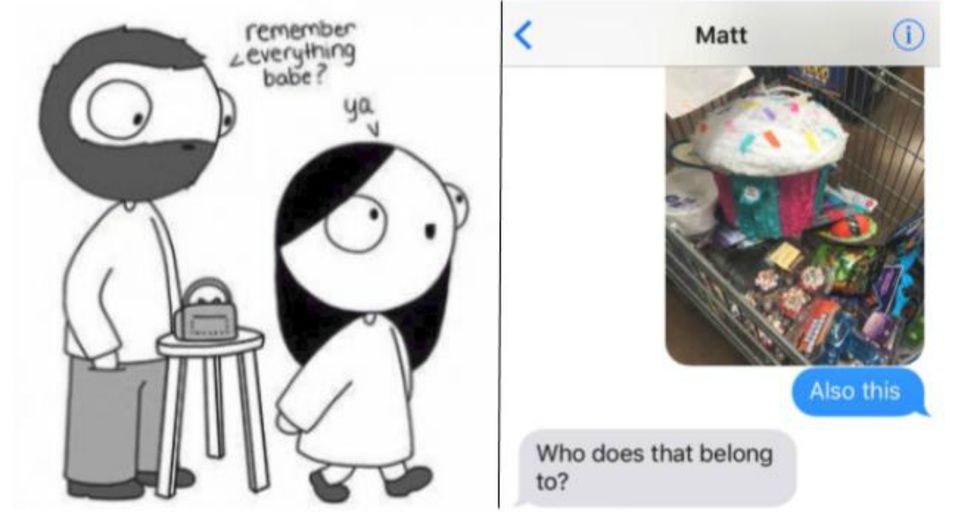 These Hilarious Memes Perfectly Sum Up the First Year of Marriage

They say the first year of marriage is the hardest. Maybe that's true — because you learn so much about each other during those first 12 months, and often a lot of stuff you didn't include in your marriage vows. Whether you’re living with someone for the first time and just now finding out how long they actually spend in the bathroom or just joining bank accounts and discovering their secret fast-food habit (aka why they always smell faintly of french fries after work), the first year of marriage is definitely a roller coaster ride.

One good reason to get married: someone to help you remember all your stuff.

Now someone is legally obligated to bring you all the stuff you forgot! That's what it says in a marriage certificate, right?

Marriage is full of surprises.

Honestly, sometimes it's better just to not ask questions and accept that you're now the prouder owner of what appears to be a cupcake piñata.

You learn a lot in that first year, like how to hide the good snacks.

Rookie mistake. She should have opened it in the bathroom with the water running to mask the crinkling.

It can be hard to keep the magic alive.

Marriage means someone knowing whenever you stay in bed watching TV in your PJs all day. But a good marriage means that your spouse will pretend along with you that you were really productive and never even mention the PJ thing.

Marriage can be amazing but also super, super gross.

You get to learn every single thing about a person. All the tiny little details that never even crossed your mind. Sometimes much, much more than you wanted to know.

One super fun thing about your first year of marriage: everyone will ask you when you're going to have babies!

Not ready to have kids yet? Never want to have kids? Doesn't matter! Now that you're married, people will demand to know when that offspring is coming. Family gatherings just got even more fun!

There's a lot to learn your first year.

Sometimes you just have to swallow your pride, say you’re sorry for calling your spouse Kanye, and eat some tacos. Even if they were acting like Kanye, at least you both get tacos.

Have we mentioned that things get gross?

A good partner knows what's best for you.

It's like you can have a whole conversation without even saying a word.

TBH most of the first year of marriage is watching TV and arguing about who has to decide what to have for dinner.