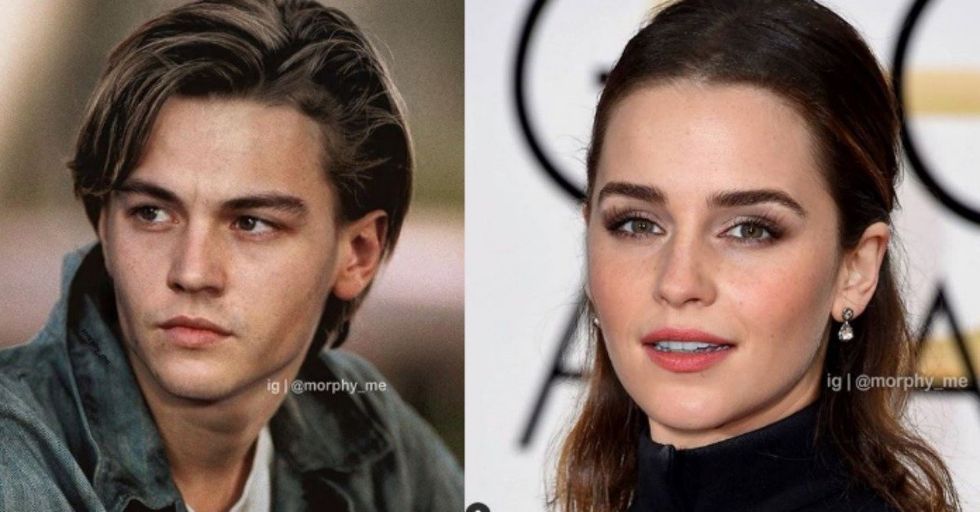 Let's face it: celebrities are just better looking than the rest of us. There's something about how symmetrical their faces are, their flawless, wrinkle-free skin, and perfectly quaffed hairdo's that make them biologically superior to so-called "normal" people, and as hard as we may try to emulate their iconic looks, it's just not possible. So try not to take it too personally.

A 25-year-old French artist who goes by "morphy_me" has been on a mission to create the "perfect" celebrity. Using his amazing photoshop skills, he combines the most beautiful features from two well-known actors or singers to create an image that can only be described as stunning.

Take a look at the 30 pics below and prepare for your mind to be blown. Want to try to figure them out on your own? Don't read the caption and see if you can decipher which two stars were used in each pic. Number 27 took me forever.

Let me guess: This just looks like a vintage pic of Freddie Mercury, right? It's actually a combination of Rami Malek and Freddie Mercury. Crazy, right?

Who's this stunning Hollywood star? It's Lady Gaga and Scarlett Johansson!

Can you figure out which iconic gingers are combined here? Amy Adams and Emma Stone, of course!

Who's this heroic woman? It's two of Hollywood's most badass ladies: Brie Larson and Gal Gadot.

This gorgeous mash-up of Blake Lively and Ryan Reynolds gives us a sneak peek of what their kids will look like in 30 years. Amazing!

No, it's not a young Hollywood starlet from the 1950s, it's a combination of Anne Hathaway and Audrey Hepburn.

Recognize these famous co-stars? It's Brad Pitt and Matt Damon!

Wonder Woman and a Jenner sister

What is it about Wonder Woman's facial features that instantly upgrades whoever she's combined with? This mash-up of Kendall Jenner and Gal Gadot is beyond flawless.

Calling all Harry Potter superfans! Recognize these co-stars from Fantastic Beasts: The Crimes of Grindelwald? Jude Law and Eddie Redmayne, of course!

What do two notorious tough guys look like when combined? This mix of Eminem and Tom Hardy equals one serious stud.

This combo of Elle Fanning and Dakota Fanning proves just how strong genetics can be. It somehow looks exactly like both of them!

Is it just me, or does this combination of Theo James and Ansel Elgort look exactly like a young, dreamy Mark Ruffalo?

Mila Kunis and Natalie Portman were cast in Black Swan partially due to their similar appearance, and this pic of their combined faces really illustrates that.

What a perfect combo! Both Julia Roberts and Anne Hathaway have an iconic smile and big, expressive brown eyes.

Who is this dashing dark-haired fellow?! If Henry Cavill and Tom Cruise had a baby, this would be the result. So, clearly, they should figure out a way to do that.

What a striking face! Can you figure it out? This one took me a while, but I finally realized that it's Amanda Seyfried and Emma Roberts.

If you've seen Lady Bird or watched even one episode of Stranger Things, you know all too well how mesmerizing Natalia Dyer and Saoirse Ronan are on screen. And their combined features are just as mesmerizing.

In case you haven't heard, Ryan Reynolds and Hugh Jackman have been trolling each other for a few years now, and it's beyond hilarious. But this representation of what their love child would look like is serious business. Seriously hot, I mean.

Maybe I'm crazy, but I think this mash-up of Emily Blunt and Dakota Johnson looks like a young Melanie Griffith. ...which would make sense, since she happens to be Dakotah Johnson's famous Mom.

I can't figure out if this pic looks more like Jake Gyllenhaal or Michael Fassbender. It's the perfect mix of the two of them, and it makes my brain hurt to look at it. Let's move on.

How gorgeous are these two besties?? Taylor Swift and Selena Gomez have some of the most striking features in the biz.

It blows my mind how natural this artist is able to make his end results look. This photo shows off Margot Robbie and Scarlett Johansson's best features without looking overly photoshopped. In fact, I can't find any trace of photoshop at all in this pic!

What happens when you combine two smart, strong, and totally badass characters? This pic of Emma Watson and Emilia Clarke, obvs!

Here's another one for you SciFi fans! Hayden Christensen and Adam Driver, aka young Darth Vader and Han Solo and Princess Leia's son.

Here's another one that throws me for a loop every time I look at it. Is it Beyoncé? Or Margot Robbie? It's somehow both at once! "Game over" is right!

And, last but not least, here's a combination of the two most popular posters on every 90's kid's wall: Leonardo Di Caprio and Johnny Depp. Excuse me while my 12-year-old self dies of excitement.