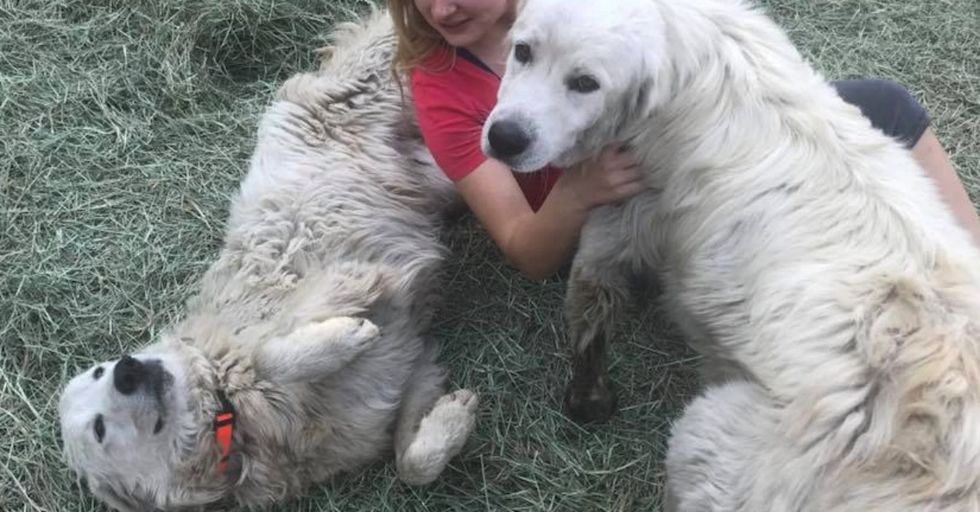 They Thought Their Dog Had Died In the Sonoma Fires...But He Actually Turned Out To Be a HERO!

Last week, the Tubbs fire ravaged Sonoma County in Northern California. The fire has been devastating, forcing people to evacuate as neighborhoods were reduced to debris. It flattened at least 3,000 homes and left over 200 people missing. At least forty people lost their lives in the disaster.

One Sonoma family, the Hendels, had to evacuate in the wake of the Tubbs fire. They tried to get their dog Odin to leave with them, but he wouldn't go. He stayed to guard the family's herd of goats and wouldn't leave their side. They thought for sure they wouldn't see their dog again, but this heroic pooch defied all odds.

Roland Tembo Hendel said that his family had just minutes to pack up and leave before the firestorm reached their property.

In a Facebook post, he wrote, "Despite the sounds of exploding propane tanks, twisting metal, and the hot swirling winds, Odin refused to leave our family of 8 bottle-fed rescue goats... He was determined to stay with the goats and I had to let him do it." The family was forced to leave without their beloved dog. He said that they cried once they reached relative safety, thinking that their pup would have an untimely death.

However, when they returned to their property days later, they were surprised to find Odin alive and safe, and still guarding his goats, of course.

Amazingly, Odin and all the goats survived the fire with only minor injuries. They had somehow found a safe place to escape the horrific blaze. The family found "a burned, battered, and weakened Odin, surrounded by his 8 goats, and several small deer who had come to him for protection and safety," Hendel wrote on his Facebook page.

Hendel reunited Odin with his sister, Tessa, the next day. But to the family's distress, the dogs and the goats went missing again yet just a day later.

Hendel posted the story on social media and people were keeping tabs on their new hero Odin, waiting to hear whether he, Tessa, and the goats had been found again. The family and their friends searched the neighborhood, called shelters, and contacted ABC7 news. They were relieved to finally find the dogs, all of the goats, and even the deer–three days later. The family vowed not to let the animals leave their sight again until they could find them a permanent shelter.

The family lost their home in the disaster, but they are thankful and teary-eyed now that their little pack is finally back together.

After the animals were found, Tembel posted pictures of them so that people following the story would know that they were safe. He wrote, "Oh Blessed Be. They are back. All of them. Safe and sound. Even silly little Tinkerbell. Odin always made sure she didn’t fall too far behind. They must have just gone to find us. Mercy. Evac team is on its way. Tears. So many tears.

?" The family created a fundraiser for the well-being of their animals, where you can read more about their journey.

The story was covered by ABC7. Frank of KTVU posted the full story from Hendel's original Facebook post on his page.

Hendel said that Odin had a check-up and is expected to make a full recovery. He's scheduled for a bath and a well-earned steak. That's a good dog if we ever saw one.