This Insanely Popular Chocolate Treat Is Now Legal in the U.S. for the First Time Since 1938 | 22 Words 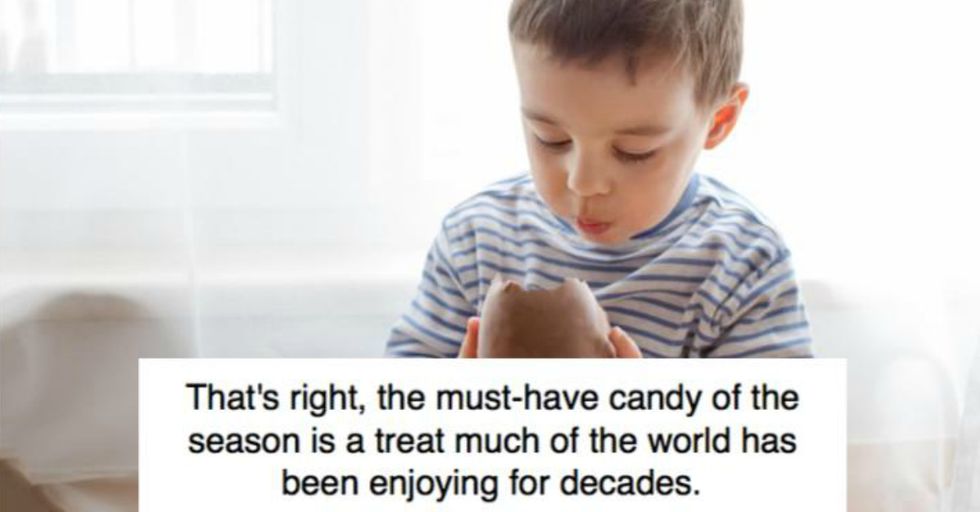 This Insanely Popular Chocolate Treat Is Now Legal in the U.S. for the First Time Since 1938

As the holiday season approaches, most of us are busily making shopping lists and trying to make sure we don't miss out on the year's hottest gifts. In a seemingly endless sea of new products, it's almost impossible to keep all those "gotta-haves" straight.

But go ahead and add one more to the list.

In great news for candy enthusiasts, collectors, and chocolate-lovers everywhere, the famous Kinder Surprise Egg will be making its U.S. debut. It's been around for decades in Europe, so what's been the holdup? Turns out, Kinder Eggs were banned decades ago.

'Tis the season of making our lists and checking them twice.

With the holidays right around the corner, we can't wait to start narrowing down the choices to find that special something for family and friends. At this point in the year, sales are the name of the game — which means it's the perfect time to load up your cart with cool new things for your loved ones (and maybe a little something for yourself).

People in the market for big-ticket items have their usual haunts.

Shoppers who have their eye on a new refrigerator, TV, or iPhone have all the usual sales sites marked and ready to go. Amazon and other discount retailers usually have the hottest items at the best prices. So if you're in the market for the latest Kindle or flatscreen bedecked with a giant bow, they have you covered.

But some of us are stocking-stuffer enthusiasts.

Not everyone looks forward to a "big" gift every year, instead keeping in mind that good things come in small packages, and searching for the perfect, tiny objects to fill our family's stockings is a chore in itself (albeit a super fun one). Small gadgets, gizmos, and popular makeup brands all fall in that category, and we're ready to swoop in and scoop them up.

And for a lot of us, holiday treats are what we most look forward to...

... so much so that the rest of the gifts seem irrelevant, as long as we get to indulge in our favorite holiday fare. Dinners are elaborate. Christmas cookies are what dreams are made of. And if candy is your treat of choice, the holiday season has the best of it in spades. What other time of year can a person eat something called Peppermint Divinity and still look cool?

This season is great news for chocolate lovers everywhere.

If you're one of those sweets enthusiasts, there's a good chance you love chocolate. And if so, this year, there's some pretty exciting news. For the first time since 1938, the famous Kinder Egg will be available in the U.S. That's right, the must-have candy of the season is a treat much of the world has been enjoying for decades.

Kinder Eggs are sure to will a hit with kids and candy lovers of all ages.

Produced by Ferrero, the Kinder Egg is a hollow chocolate shell that houses a plastic capsule, with a small toy inside. These "hidden treasure" candies have been insanely popular in Europe for ages. But despite their cult status overseas, Americans have been denied the magic of Kinder Eggs for decades.

The ban on these eggs was pretty serious.

Up until it was recently announced that Ferrero would be distributing the popular chocolate, most Americans were unaware that Kinder Eggs were technically illegal. The FDA banned them in 1938, when the Food, Drug, and Cosmetic Act was originally passed. Deeming the the candy too dangerous for children, Kinders were labeled as a choking hazard and their import was prohibited.

Other chocolate manufacturers opposed the ban.

Preventing the sale of chocolates with toys in them didn't sit well with companies like Swiss-based chocolatier Nestle. Desiring to push its new product, the Wonderball — a chocolate ball with a toy inside — Nestle challenged the FDA on its ruling and went so far as to lobby the U.S. government. It met zero success, and subsequently had to pull Wonderballs off shelves just two months after their release.

The ban hasn't stopped a fan base from growing in the states.

While Kinder Eggs are sporadically smuggled into the U.S. every year, the chocolate candy has managed to build a growing following through sites like YouTube. Ask any parent, and there's a good chance they've had to sit through a video built entirely around watching someone unwrap a Kinder Egg to expose what's inside.

U.S. fans will finally be able to realize their dreams, even though the new egg is slightly modified.

It's tough to say what the rush will look like when these chocolate beauties hit store shelves on Black Friday, but what we do know is that they won't look exactly like the original Kinder Eggs. To comply with FDA standards, Ferrero is releasing a confection that has cream and wafers sealed on one side and a toy prize sealed in the opposite half. So if you were hoping for the plastic ball inside, that part's a minor disappointment.

One thing's for sure: we're looking forward to these eggs dropping.

If they become anywhere near as popular as the Kinder Surprise European counterparts, the new Kinder Joy Eggs are guaranteed to be a huge hit this holiday season and beyond. And, just like everyone else, we'll be heading to our nearest store shelves to see if we can snag a chocolate-covered treasure of our own.