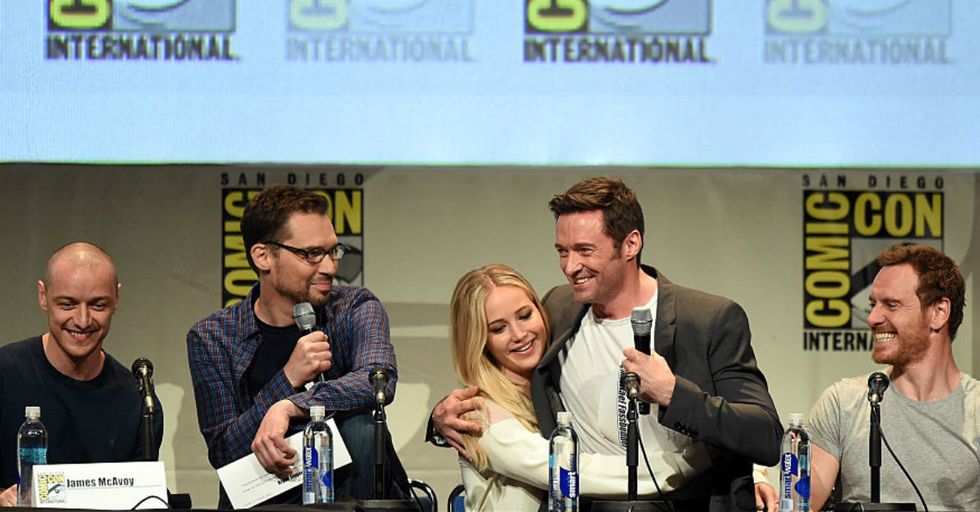 Early this week, news emerged that Bryan Singer, the director behind such films as X-Men and Superman Returns had been fired from his latest outing, the Freddie Mercury biopic, Bohemian Rhapsody.

20th Century Fox, the studio behind many of Singer's films, put out a statement citing Singer's "unexpected availability," a claim which Singer seemed to confirm in a statement:

With fewer than three weeks to shoot remaining, I asked Fox for some time off so I could return to the U.S. to deal with pressing health matters concerning one of my parents. This was a very taxing experience, which ultimately took a serious toll on my own health.  Unfortunately, the studio was unwilling to accommodate me and terminated my services.

Rumors also floated that Singer had butted heads with the film's star, Rami Malek, and that was the primary reason he was let go.

Wow I already loved Rami Malek but now he apparently brought down Bryan Singer and I'm over here like https://t.co/VYvGdWvhtt
— Wil (@Wil)1512429365.0

Hollywood gossip mills, however, quickly began to speculate that a sexual assault scandal was brimming. After all, of all the Hollywood moguls accused (or yet to be accused) of sexual assault, Bryan Singer is literally the most likely candidate.

Bryan Singer has had a long history of questionable sexual behavior.

Its about time Bryan Singer get exposed for being a perverted pedophile. He has paid off so many of his victims, ho… https://t.co/ZIYbaOAOfu
— Coughing Hillary ™ (@Coughing Hillary ™)1512746555.0

In 1998, Singer and his producers were sued by the parents of Devin St. Albin, a 14-year-old student on the set of Singer's adaptation of the Steven King novella, Apt Pupil.  His parents alleged that Singer and cohorts had filmed the boy and other minors naked in for a shower scened without parental permission.

Albin's parents weren't the only ones who sued, however.

Several of the other boys also sued Singer and his producers, but the suits were ultimately dismissed for lack of evidence. This is a pattern that repeats throughout Singer's life – people make claims against him, said claims either disappear, or are walked back by accusers who then apologize for even speaking out. It's almost like Singer has guardian angels, much like another famous man accused of sexual assault, Harvey Weinstein.

By 2000, Singer had become a minor investor in the Digital Entertainment Network (DEN), a Youtube-like site that came out nearly a decade before Youtube.

DEN was valued at $58 million, had 200 employees as well as sizable investments from Dell, Microsoft and Chase. Within a few years, however, DEN had folded and its founders Marc Collins-Rector,  Chad Shackley, and Brock Pierce had fled the country to evade lawsuits from former employees who alleged that the founders had "offered them jobs, then sexually and physically assaulted them as well as coerced them to consume prescription drugs and controlled substances."

A later Radar article would describe one of DEN's programs as being a "gay pedophile version of ‘Silver Spoons.'" So, how is Singer directly involved with all this, you ask?

Well, Singer introduced Brock Pierce to the other two founders of DEN when he was only 17 years old.

Singer also went to numerous wild parties at Collins-Rector and Shackley's Encino estate, which were filled with "twinks."

In fact, this is something that comes up time and time again – Singer has a noted appetite for "twinks," a term for slender, boyish-looking young gay men.

In fact, when Vulture did a profile of actor Noah Galvin (of the now-canceled ABC sitcom "The Real O’Neals,"), they added several quotes from Galvin including this one – "Bryan Singer likes to invite little boys over to his pool and diddle them in the fucking dark of night."

Vulture deleted the quote, and appended the interview with an apology from Galvin.

"I sincerely apologize to Bryan Singer for the horrible statement I made about him in the interview I gave to New York Magazine," Galvin stated. "My comments were false and unwarranted. It was irresponsible and stupid of me to make those allegations against Bryan, and I deeply regret doing so."

This, again, is a pattern of Singer's – the accusation, and then the retraction and apology.

In 2014, former child actor Michael F. Egan (who had previously filed a lawsuit against DEN), filed a civil suit against Singer, stating that "between August 1, 1999 and October 31, 1999, when he was 17, Singer flew him to Kailua, Hawaii multiple times under the guise of discussing movie roles but fed him cocaine, alcohol, and other drugs and and anally raped him."

Singer refuted the claims saying they were "outrageous, vicious and completely false."

He further added that he wasn't even in Hawaii on those dates. Two months after filing, Egan dropped the lawsuit, and his attorneys made formal apologies to the other men named in the suit, television producer Garth Ancier and former Walt Disney Co. executive David Neuman, in addition to paying them a settlement. Again, it's like Singer has a guardian angel, or even several. But that wasn't the end of it...

Later in 2014, Singer was also the subject of yet another sexual assault lawsuit.

The Bryan Singer Timeline: A History of Allegations and Defenses, from Troubled Films to Sexual Assault Claims… https://t.co/cyjwcEehrG
— IndieWire (@IndieWire)1512751500.0

An anonymous plaintiff known as John Doe No. 117 filed a lawsuit from the U.K. alleging that Singer and producer and theme park designer Gary Wayne Goddard, another DEN investor lured him into Singer’s suite by pretending they were going to show him him Superman memorabilia.

From there, things got horrifying.

By July, the case against Singer was dropped.

This pattern even popped up when Oscar-nominated documentarian Amy Berg premiered her film, "An Open Secret," which followed "five former child actors — including former DEN plaintiffs Egan and Ryan, as well as Corey Feldman and Todd Bridges — who were sexually abused by multiple predators."

Though Singer was alluded to in the film, and there was copious footage of him at DEN parties, there were no details of allegations against him.

Even then, the film could not find distributers. As producer Gabe Hoffman told The Guardian: "We got zero Hollywood offers to distribute the film. Not even one. Literally no offers for any price whatsoever." Hmm, who would have thought that a film about Hollywood pedophilia wouldn't find a home in Hollywood.

This week, new allegations against Singer have emerged.

Cesar Sanchez-Guzman has sued Singer for sexually assaulting him in 2003 when he was only 17 years old. According to the New York Times, Sanchez-Guzman alleges:

He met Mr. Singer for the first time at the 2003 party, which took place on a yacht in Seattle, when he offered to give him a tour of the boat. While showing him the master bedroom, according to the lawsuit, Mr. Singer shut the door behind them and demanded sex from Mr. Sanchez-Guzman.After he refused, the lawsuit says, Mr. Singer pushed him on the bed and sexually assaulted him.

But what happened AFTER the assault will make your blood boil...

After the assault, Singer threatened Sanchez-Guzman.

According to the lawsuit:

Later, Bryan Singer approached Cesar and told him that he was a producer in Hollywood and that he could help Cesar get into acting as long as Cesar never said anything about the incident. He then told Cesar that no one would believe him if he ever reported the incident, and that he could hire people who are capable of ruining someone’s reputation.

Again, all sorts of guardian angels can ruin people's reputations, as we have seen from the fallout of the Weinstein scandal.

Singer has vehemently denied the claims.

Singer's representative told the Associated Press he "categorically denies these allegations and will vehemently defend this lawsuit to the very end," adding, "Once Bryan prevails, he will pursue his own claims for malicious prosecution." Right. Interestingly, this representative probably wasn't his longtime publicist Staci Wolfe or his talent agency, CAA. Both quietly dropped him in early November.