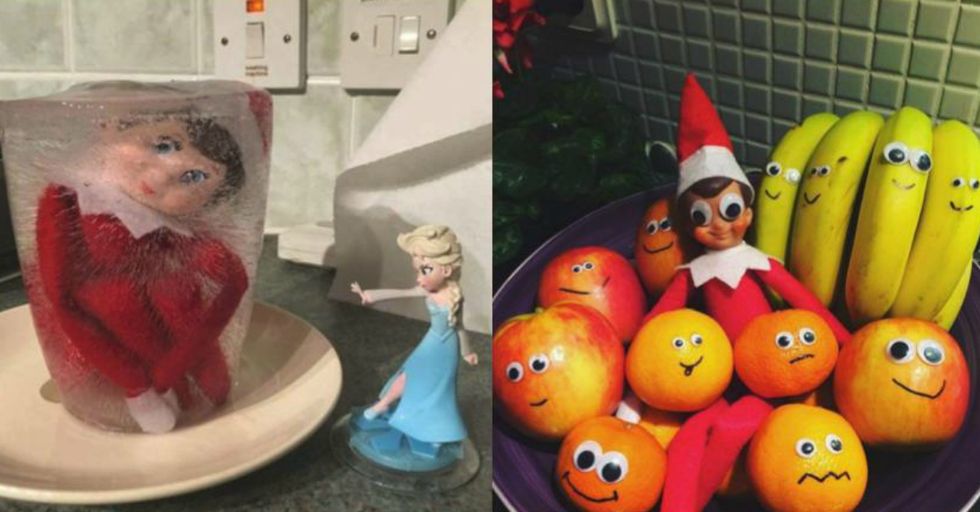 While there are some super great things about the Christmas season (gingerbread lattes and sugar cookies come to mind), we can all agree that some parts of the holiday season have gotten a little out of control. For instance, it’s now basically legally required that every home puts up an elaborate light display, giant inflatable snowman, or at the very least a star shower light pointed at the front of their house starting sometime in the middle of November.

Things can get even more complicated for parents, who are expected to make the holiday season perfect for their kids, by buying them all the hottest toys, decorating a tree, and of course, setting up the infamous Elf on the Shelf every night. But one parent in Chicago has come up with a brilliant idea: hire someone else to do the latter.

The Elf on the Shelf has taken the internet by storm.

If you haven’t been on the internet in the past five years, this is that tradition where, after their kids go to sleep, parents set up an elf figurine somewhere in their house, usually doing something naughty.

Parents often post the crazy situations their elf “got into" on social media.

But some parents, understandably, find the whole thing overwhelming.

Needless to say, it can make parents who may not be able to come up with an elaborate display of mischief for the elf to get into every single night for 25 days feel like total slackers.

One mysterious Craigslist poster in Chicago has had it with Elf on the Shelf, only a few days in.

Posted under the “domestic gigs" section, someone left an ad begging someone to please do Elf on the Shelf for her. And it’s pretty funny.

In the hilarious post she expresses her obvious frustration with the whole ordeal.

The post starts: “In search of someone to come to my house and move this god d@mn Elf on the Shelf (aka Cocoa) every FUNKing night, some time past 9 PM CST, but also before my daughter gets thirsty at a completely unpredictable hour in the middle of the night."

Apparently her daughter’s father bought the elf without her input.

“While I have narrowly avoided this atrocity of a tradition year after year, my 8-year-old successfully conned her father into buying her one and because it's 'magic' and 'actually kind of fun,' (according to the man who only has to move it twice before Christmas *hard eyeroll*) and it, of course, found its way back to Chicago, to eerily creep on my daughter each and every waking moment and simultaneously thieve whatever small shred of sanity I had left. *pops cork on wine bottle with teeth*" So close, mystery Craigslist poster! Most kids wouldn’t make it all the way to age 8 without questioning why the elf visited all her friends but never her. You almost got away with it!

But alas, the elf has arrived and she’s not happy about it and the um, delicate conversations she’s no longer allowed to have.

Apparently their particular elf (named Cocoa) has delicate sensibilities: “So, forget that I've spent the better part of a decade teaching my daughter to make good and kind choices REGARDLESS of who is watching or will find out — now we aren't even allowed to have 'private' conversations IN OUR OWN HOME because Cocoa is within earshot and 'that's kind of embarrassing.' (Our private conversations are about poop. I AM WHISPERING ABOUT THE CONSISTENCY OF POOP IN MY OWN HOME.)"

She laments that it’s just too hard to remember to do the elf thing every night.

It really is hard to think of something good to do every day for 25 days straight to be honest. The post continues: “Now, I am a single parent with a career, so as I'm sure you can imagine, there is quite literally NOTHING I love more than finally laying down in bed after a long day of work, schedule juggling, human-tetrising my way onto the El, making dinner, begging someone tiny to eat, shower and floss, worrying about tech neck, scrambling to check homework assignments/notes/permission slips, laundry, and cleaning up whatever else exploded and/or imploded that day, only to suddenly remember I didn't move that GOD FORSAKEN ELF THAT'S *STILL* ON THE SHELF from the night before."

She also shares her failed attempts that led to her drastic measures.

“At which point, I begrudgingly thrash off the covers and fumble around our 42-square-foot apartment in the dark, praying I don't accidentally paralyze the cat, and try to find something to attach these little hand sewn arms (the bitch's hands are *literally* sewn together) around anything remotely festive. After a few failed attempts and spilling the ground cinnamon I forgot was set out to aid her magical flight back to the North Pole, my genius idea is to let this trick ride our Christmas tree like a rodeo bull. Obviously, I knock the tree and all of its 734 jingle bells onto the floor trying to mount her up there and pray my daughter is not springing from her bed to see what is the matter. Anyway, I was over this shit before it started. So if you are someone with a strange amount of 'holiday spirit' or are trying to win some weird 'Buddy the Elf' competition and can carry us through to the holiday — I encourage you to apply!"

Of course, she’s not just going to let anyone into her house to move an elf around.

There are requirements, obviously. “Requirements: -Must bring your own moccasins or have superior ninja skills ... either will suffice. -If my child wakes up during your shift, you *must* be willing to pretend you ARE the Grinch, and convince her that she has saved Christmas by catching you. +Night vision goggles are a plus. *Serious inquiries only. **Jk."

We’ve all been there.

Christmas can be stressful enough without having to sneak around your own house like a burglar to convince your kids a magic elf runs around all night messing with your stuff. Sometimes you just need a little help, even if it's from a stranger on Craigslist who you are inviting into your home to ... wait, nevermind.

It turns out the mystery poster is Tiffany France, a single mom in Chicago.

And when she’s not desperately looking for elf-assistance, she has a website where she writes about being a single mom.  But Tiffany did pretty much sum up what most parents are thinking. Who thought adding another Christmas tradition was a good idea? And every day?!? Who has time for that?! There are presents to wrap, shopping to do, eggnog to drink!

We hope she finds a good elf engineer!

We're pretty sure the post was a joke, but we kind of hope she finds another creative parent who can help! Because while the stress might be too much for some parents, the parents who love doing Elf on the Shelf sometimes really kill it! Why not spread the creativity around?