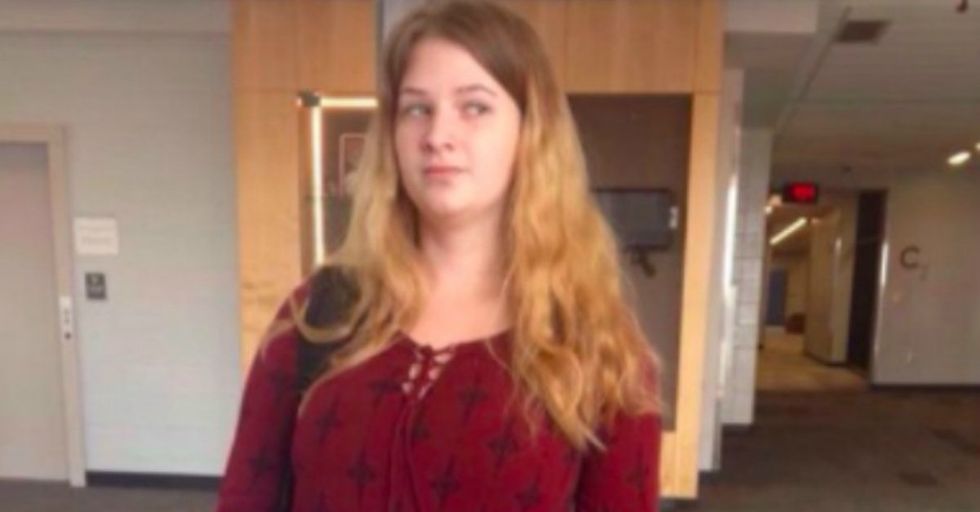 This Teen Got Sent Home for a Insane Dress Code Violation: Being 'Too Busty'

When you're in high school, there are a lot of things to worry about. There's all the homework you have to do, plus extracurriculars, plus making post-high-school plans, plus studying for tests, plus navigating the endlessly shifting tides of drama. It's a lot.

One thing you shouldn't have to worry about is getting kicked out of class because of the shape of your body. But that's exactly what happened to Kelsey Anderson, a 17-year-old student at Joplin High School in Missouri. Her outfit didn't show off her midriff or her shoulders. It wasn't too tight or too short. According to her teacher, it was her body that was the problem.

Not too long ago, all you had to before school in the morning was wake up and throw on an outfit.

But lately, it seems as though there are more and more stories of ridiculous school dress code violations popping up online. Most of the time it's young women who are being sent home due to "being distracting."

Here's another example. In this case, approximately 20 young women were sent home.

And don't forget about this joke of a dress code violation.

In this case, the young woman was sent home because her shorts were too short. Which is weird, since they're a pretty standard shorts length.

These days, it seems like outfits need to look like this in order to make it past the dress code inspectors.

Don't get us wrong. It looks very comfy. But things are getting a little out of hand.

Case in point is the story of Kelsey Anderson, pictured here.

Before you jump to any conclusions, though, you should probably know that Kelsey is the young woman on the right. Wait until you hear what her teacher told her...

Here's the "scandalous" outfit that got Kelsey kicked out of school for the day.

Long-sleeve shirt. And a pair of jeans. What is the world coming to? According to Kelsey, her teacher said that, "bustier women need to wear clothing that covers their cleavage" and, "plus size women need to dress accordingly." Kelsey was understandably mortified at being told this in front of her entire class.

When Kelsey's mom picked her up from school, she took this video of another student at the high school.

The student at first assumed Kelsey was kicked out because of the holes in her jeans (which — just so we're clear — would also be nuts). But it wasn't the holes in Kelsey's jeans that were deemed inappropriate. It was her body. Yikes.

She posted on Facebook asking any other parents from Joplin High School to speak up about times their daughters had been sent home due to their body type.

Eventually, Barber hired an attorney to represent her daughter.

Again, she asked whether any other parents of Kelsey's high school had dealt with similar issues. Barber was immediately on her daughter's side against the school's ridiculous policy. In her Facebook post, which has since gone viral, she wrote: "I refuse to put my daughter in a situation where her self esteem is completely destroyed. She is there to learn. This whole time she was missing out on an education while we were all sitting in a room discussing her boobs." Preach, mom!

Naturally, people are outraged at the school's treatment of Kelsey.

When people look at Kelsey's outfit, all they see is a young woman wearing a typical outfit. Because that's all there is to see. Some people are even pointing out how the school's dress code is not consistent when it comes to other students. Take the cheerleaders' uniforms, for example...

According to the school's dress code, skirts should be no shorter than 4" above the knee. Clearly, these uniforms aren't up-to-code.

In addition to the skirts being too short, their uniform straps are not as wide as a credit card (another rule from Joplin's dress code). Some might even call these uniforms "excessively tight." Now, that doesn't mean the cheerleaders are inappropriately dressed. It just means that the school appears to be wildly inconsistent when it comes to who has to follow the rules.

The sooner everyone realizes that, the better. Women's bodies are not a distraction, and simply having a certain kind of body is definitely not an adequate reason to kick someone out of school. Kelsey's mom isn't giving up the fight anytime soon. "Thank you so much for standing with (Kelsey)!" Barber wrote to her supporters. "I started this fight for my daughter. I will finish it for yours."