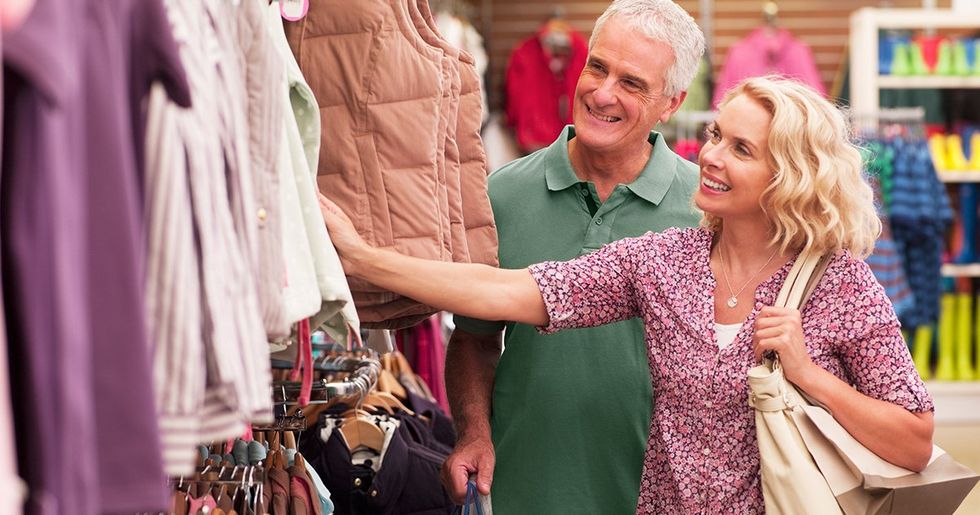 If you're reading this, chances are you know a Baby Boomer or two. In fact, your parents may be "baby boomers."

Anyone who was born between the years 1946 to 1964 fall into this category. The birth rate during this time period spiked post World War II. And as we know, every generation leaves its mark in society. Some good, some bad... and the baby boomers definitely came up with some wild inventions that only they are not ready to part with.

Most baby boomers hit retirement age in the year 2012. "And even though they are aging – about half are 60 to 71 years old, the other half between 53 and 60 years old – they continue to forge new ground and explore new lifestyles, as economic, technological and medical advancements have provided them with many more alternatives in how and where they can spend their time," says Investopedia.

The boomers once made up 40% of the American population. Now, they make up 20%.

And that 20% is not letting go of certain things that really aren't that cool (but boy, do they think they are).

Let's take a look at some of these so-called "cool" things that baby boomers just can't part with.

According to Herald Weekly, one of the most boring sports to watch (and play) is golf. Yet, boomers tend to disagree and will often be found on the golf course when the weather warms up.

And in the winter time, they play an indoor sport.

Get your head out of the gutter. We all know the baby boomer's favorite indoor sport is racquetball. They love to smack that ball against the wall and build up a good sweat, in a small room with no ventilation.

Speaking of indoor activities, you can thank this generation for the creation of the mall. And no, this is not a bad thing, but more and more malls are becoming extinct.

And you know why, right?! ONLINE SHOPPING. However, you will see some older folk getting their daily power walk in, wearing their favorite New Balance tennis shoes from the '80s.

Boomers are also known for eating their toast naked.

Dry toast is definitely, well, dry. I am not a huge fan of the millennial favorite – avocado toast, but I do prefer some butter on my toast. You know, for flavor.

It's super uncool to wear socks with sandals, but do you know what's even way uncooler???

Wearing Crocs. And hold up, what's worse than that? Crocs with socks. Why, why does anyone think this looks OK? Sandals were made to let your feet breathe. And Crocs are just ugly... there I said it.

If you are a boomer or know of a boomer, chances are they have an email address with an ancient email domain.

Like AOL, Yahoo, or even my all time favorite – att.net.

This generation also prefers to iron all of their clothing.

Steamers have replaced the iron, and some people don't even steam or iron their clothes at all. Boomers are the exception to that. They like to see creases in their pants.

And speaking earlier of Crocs that are worn in the summer, boomers prefer a certain type of shorts to wear with those Crocs.

Jorts. A clothing item that is part jean, part short. And so not sexy.

But wait, no outfit is complete without their favorite type of t-shirt.

An airbrushed t-shirt that is. Because baby boomers like to showcase the names of their grandkids, airbrushed style.

If you ever visit a boomer's home, you are likely to find some words of inspiration.

On the wall. Word art is super popular amongst this crowd. And no, we cannot understand why.

They also have a plethora of throw pillows.

Pillows, pillows everywhere! Just collecting dust and not having a real purpose, other than being a throw pillow.

Do you know who loves a good conspiracy theory? You guessed it - the baby boomers.

They probably have a huge pile of the National Enquirer in their magazine stand.

Baby boomers also feel the need to have a landline phone.

This may be wise of them because some landlines are free. And they probably aren't super comfortable texting, but if they do – they more than likely use the voice text feature.

Their favorite way to vacation is on a cruise! I can't really blame them; free food around the clock, nightly entertainment, and an itinerary. It's a no brainer.

Paper bills to save a tree or two and opt for paperless? Nope. The boomers want nothing to do with paperless.

Most boomers like to receive a bill in the mail and pay by check or in person. Hey, some habits die hard. I get it.

If you work in an office with some boomers, chances are you noticed their language in an email.

You noticed that they seem LIKE THEY ARE YELLING AT YOU. Because they prefer to use all caps (for some reason?).

They also prefer a certain seasoning on most of their foods.

The '80s called and want their seasoning back, Mrs. Dash. That's right – this mix of herbs is super popular with this crowd.

If you have ever channel surfed too late or early in the day, then you probably bypassed a home shopping network.

These channels always influence you making you think you really need what they are trying to sell. And the boomers, they believe it.

Another item of clothing we seriously do not need - pleated pants.

Also known as "slacks." I am embarrassed to say I actually bought a pair of these for my first real office job. And it's a painful memory.

Wall decal inspiration is not the only design tip that a boomer will offer you.

They are also big on wallpaper. And not just any old wallpaper, patterned is important. No room is off limits, not even the bathrooms.

Baby boomers are also known to be greedy.

Because they prefer fossil fuel. But as generations grow and learn, we need to move with the times and realize there are alternatives – which are important – for the survival of the planet.

Another thing of the past - fuzzy toilet seat covers.

Can we say germ city? I think about how many times I have to wipe the seat after my kids or husband, I cannot even fathom how gross that would be if there was a seat covering.

You also probably remember a food staple your mom always made for dinner.

Meatloaf. That rectangular, slimy chunk of meat. Though not always horrible, it definitely does not get you excited for meal time.

If your mom didn't make you meatloaf, then perhaps she made you some type of wonky salad.

Like a bizarre combination of broccoli, mayonnaise, and grapes. Um, yum?!

If you own a Snuggie, thank a boomer for that.

Because baby boomers love a good infomercial. It seems malls, home shopping networks, and infomercials are their favorite ways to shop.

Another old makeup trend that seems to be dying is the Avon lady.

I knew many women who sold Avon as a side hustle, but nowadays most women buy their makeup from Ulta or Sephora.

Newspapers are also a thing of the past.

The first thing most people do when they wake up in the morning is to check their phones. All breaking news is now available via the Internet. There really is no need for the old-fashioned newspaper.

Whoever invented liquid soap was a sheer genius; however, bar soap is still available for purchase. And I'm guessing we know who still buys bar soap.

Remember being a kid and washing your hands with that gross looking bar of soap with a piece of hair attached to it? Nasty.

And finally, the 9 to 5 is a slowly dying workweek.

With the options of telework and flex schedules, the 9 to 5 will soon be non-existent (thank, God), because this schedule doesn't work well for parents who both work outside of the home.