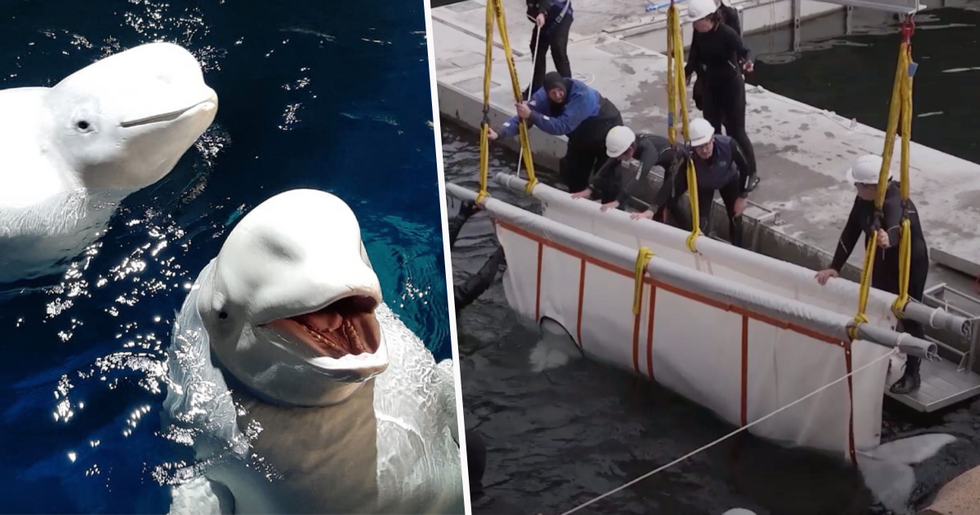 Remarkable footage has emerged today that shows 2 beluga whales being rescued from years of captivity and abuse at an aquarium in China... And they just couldn't contain their joy.

There's something undeniably quite distressing about seeing such intelligent and majestic creatures forced into chlorine tanks for the sole purpose to entertain and make money for humans.

However, in 2013, people's attitudes on the matter were to change forever.

But, this week, there has been a huge development in this fight.

2 beluga whales have been rescued and freed from an aquarium in Shanghai, China, where they had been forced to perform as show animals for the last decade.

Like other belugas, these whales are incredibly intelligent, with scientists calling their species the "most intelligent creatures of not only the ocean but the entire animal kingdom."

The duo were originally captured at a Russian research center...

But, ten years ago, they were transported to Shanghai's Ocean World, where they were forced to perform tricks and shows to audiences in exchange for fish.

Obviously, this isn't the life for intelligent belugas like Little White and Little Grey...

So the U.K.-based charity, Sea Life Trust, decided to step in.

After over a decade in captivity, the pair are finally set to experience a taste of freedom.

Sea Life Trust has shipped Little White and Little Grey around 6,000 miles away to their new home in Iceland, where they will swim in the open ocean once more.

To get them out of the aquarium and shipped halfway around the world...

Little Grey and Little White had to be put into specially designed slings that helped protect their bodies in a lorry, then an aircraft, and finally a harbor tugboat.

They are set for a whole new lease of life in their specially designed "open ocean" sanctuary.

Sea Life Trust head, Andy Bool said: "We're absolutely delighted to be able to share the news that Little Grey and Little White are safely in their sea sanctuary care pools and are just one step away from being released into their open water home."

They are currently being held at a refuge in Klettsvik Bay off the south coast of Iceland...

Before they will be released into their huge sanctuary.

"Little Grey and Little White are now in their bayside care pool and will need a short period of time to acclimatize to their new natural environment and all the outdoor elements before their final release into the wider sanctuary in Klettsvik Bay in the Westman Islands off the south coast of Iceland."

But, despite their long journey...

The duo are in great health. The statement continued: "The expert team and the independent vets were with Little Grey and Little White throughout the move and said they are healthy and are feeding after the short trip from their landside care facility back to the sea."

You can watch Sea Life Trust's footage from their rescue mission here.

We wish Little White and Little Grey a lifetime of happiness in their new home. For more on the devastating treatment of our marine animals, keep scrolling...