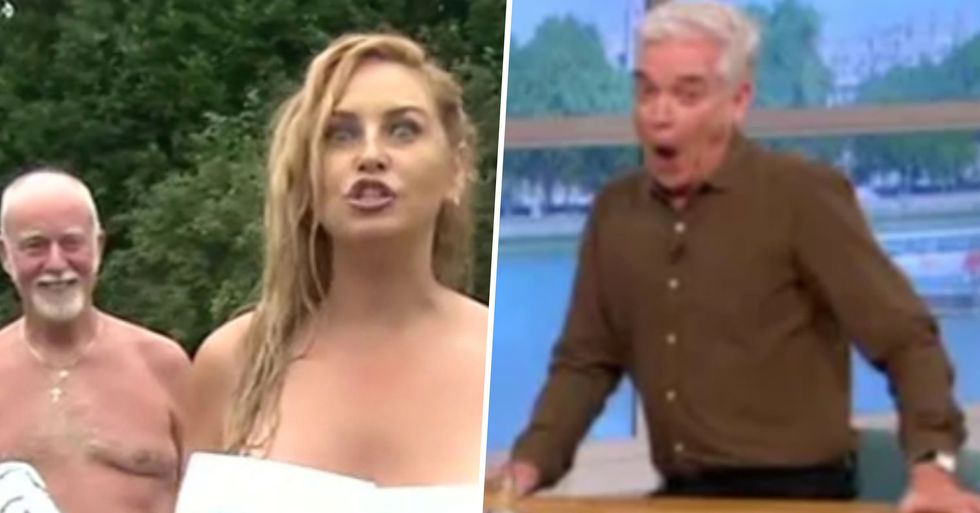 Viewers were left in utter shock when a nudist accidentally flashed himself during a live broadcast.

You won't believe your eyes when you see this one...

And all thanks to the internet...

These little hiccups can live on forever.

Well, one reporter recently found herself in a rather bizarre situation with a group of pro-nudists. And believe me when I say this, viewers were left utterly shocked thanks to a little live TV hiccup.

And on today's show, they decided to feature a group of nudists from Liverpool whilst advertising their weekly competition.

Presenters Phillip Schofield and Holly Willoughby went live to reporter Josie Gibson, who is known for often making a fool out of herself on live television.

Clad in a bathing suit and sarong, Josie explained that she was visiting the Sun & Air Naturist club that welcomes nudity with open arms.

Josie explained that the club had actually seen a rise in members since the lockdown was implemented back in March...

So it turns out that more people have been embracing the nude way of life than we'd expect! British people are weird...

Now, this is when things got slightly weird...

After a few minutes, the camera suddenly showed Josie stood amongst a small crowd of nudists... in the nude herself!

Using nothing but a windbreak and her cue cards to maintain her modesty, Josie stood boldly amongst her naked peers.

Not something you'd expect to see at 10 a.m, right?

Josie started to explain the competition that viewers could enter, which included the exciting opportunity to win a brand new car.

But when the camera panned over to the shiny new car on display, one of the nudists positioned behind the open door decided to shift slightly... putting a bit too much of himself on display.

Phillip and Holly were clearly fighting back laughter...

And just as the man exposed himself, the camera quickly and desperately panned back to Josie.

Phillip and Holly were beside themselves...

And poor Josie seemed completely oblivious to the terribly awkward shot she was stuck in as she carried on with her segment.

The unaware nudist then grabbed a towel...

But failed to cover himself appropriately, which is both cringeworthy and hilarious to witness.

Of course, viewers of This Morning were left completely stunned from the whole awkward display...

OMG did anyone watch @Josiestweet reporting live from a nudist colony on @thismorning 😂😂😂 One of the blokes stood b… https://t.co/iFkQqSHEgr
— Ellie Colton (@Ellie Colton)1599479134.0

And many took to social media to express their disbelief.

Many questioned the ideas behind the breakfast show...

And who on Earth comes up with these bizarre features at such an early time of the day!

How was the nudist in question unaware of his stance?

Omg just looking at @Schofe & @hollywills faces on @thismorning with the nudist man behind the car door showing a b… https://t.co/lIDOmm3D6k
— Juliana Cureton (@Juliana Cureton)1599477656.0

This is something he won't be forgetting for a long time.

It was all very stressful...

And it's enough to put anyone off having a job in television!

But not everyone found the little mishap funny.

WTF are they at a nudist club for the competition? Talk about an all time low #ThisMorning
— Traylor Holmes (@Traylor Holmes)1599477536.0

Many viewers felt showing a nudist club on live morning television was completely inappropriate and, as this Twitter user said, was an "all time low."

You can watch the eye-watering clip for yourselves here:

Viewers discretion is advised! Keep on scrolling to check out the news reporter who accidentally turned on the face filters during a live broadcast...