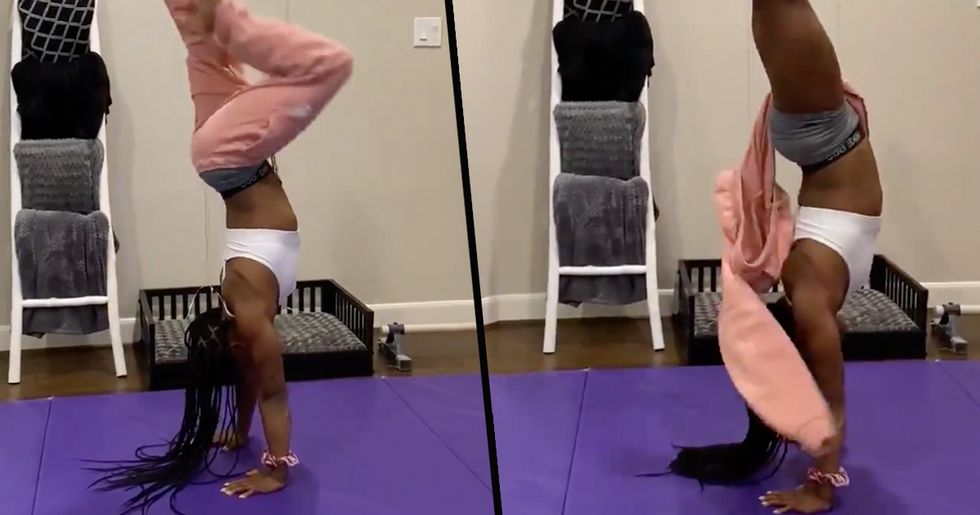 You may or may not have heard, but Texan gymnast, Simone Biles, continues to make history for this country. For as long as we can remember she's been smashing records and setting a new standard. A while back she became the first-ever gymnast to attempt, and successfully land, a double-double dismount from a high-beam. Then she became the first woman to ever land a triple-double in competition during her floor routine. All in the same week. Her talent knows no bounds.

And it seems she's now responsible for what is possibly one of the greatest revamps of a challenge yet: The Handstand Challenge, but unlike Tom Holland, Biles has opted to increase the difficulty by taking off her pants instead of her shirt. Talk about superhuman!

Keep scrolling to see the amazing video... she makes it look so easy.

When she was 6, Simone and her younger sister, Adria, were adopted by their maternal grandparents.

Her grandfather, Ron, and grandmother, Nellie, took the girls in as their own, and even suggested that they call them "mom" and "dad." Speaking to Texas Monthly, Simone recalled the moment that her parents permitted for their titles to be changed: "She said, ‘It’s up to you guys. If you want to, you can call us mom and dad.' I went upstairs and tried practicing it in the mirror—‘mom, dad, mom, dad.’ Then I went downstairs, and she was in the kitchen. I looked up at her and I was like, ‘mom?’ She said, ‘Yes!’ "

And then, the gymnast returned to our headlines.

Commenting on her incredible victory, Simone said: "It wasn't as good as in training. I'm just happy that I landed it because I feel like after night one, my confidence got shot down. So I was really worried about it going into today, that's all I could worry about. So I was really happy."

When she won her 21st medal in 2019, Biles overtook Russia's Svetlana Khorkina for the women's record. She then overtook Vitaly Scherbo - who's held the record for almost 30 years - to become the world's overall most decorated - including both male and female gymnasts.

And if that wasn't enough, Biles has recently decided to amaze us yet again.

While we're all stuck in quarantine, we've been seeing new challenges pop up, right, left and center. After Tom Holland posted a video of himself participating in The Handstand Challenge, the world wanted to give it a go.

And, as a gymnast, this is right up her street.

But in true Biles fashion, she wanted to revamp the challenge in order to kick up the difficulty aspect. And boy, did she deliver... Keep scrolling to see the amazing video.

Women all around the world have taken it upon themselves to follow in Biles' footsteps...

Check out this video a user posted after she was inspired by the gymnast.

And this user also wowed us with her talent.

All these videos are great, but...

I wonder if Tom Holland has seen this video yet...

Ryan Reynolds has, and his response was nothing short of hilarious but totally relatable...

And Chrissy Teigan also had her say:

@Simone_Biles Simone I have to lay down and have someone else do it normally
— chrissy teigen (@chrissy teigen)1586648842.0

She took the words right out of my mouth.

Others agreed with those comments...

My core strength is seriously lacking to the point where I couldn't even do a handstand for 5 seconds, let alone complete the task at hand.

But check out the full video of Simone Biles absolutely smashing it:

There's a reason why she's the world's most decorated gymnast. If you're in the mood to see Tom Holland and Jake Gyllenhaal take on the shirt version of this extreme challenge, then keep scrolling...