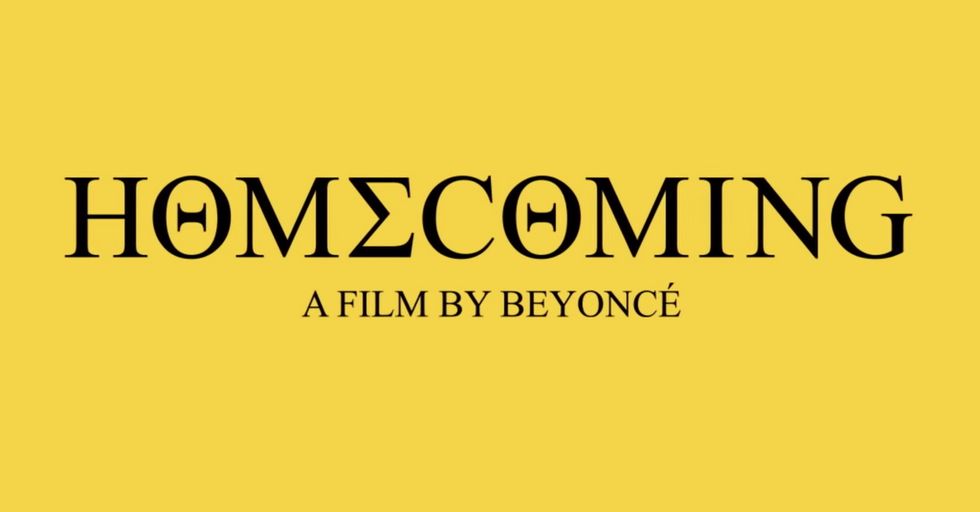 We all have our favorite musical artists. You know, the ones we listen to constantly, know every track on every album, and spend our life savings on concert tickets when they come to our city to perform. We know the inspiration behind certain songs, we blare their music during every major life event - through the breakups, the makeups, and all of the in-between.

Music is so powerful. A song can heal a broken heart or make you swoon. There's also a song or artist for every mood - that's the beauty of music. It's versatile - your musical taste can range from classic rock to old '90s R&B, to musical theatre. Nobody here is judging your musical preferences, trust me.

There are certain musical artists who are so far ahead of everyone, that it's hard to find someone who dislikes them. They're in another league - they're just brilliant. Beyoncé is that kind of artist. But if you've never seen her in concert, don't worry. She has a new film, Homecoming, dropping on Netflix, and her iconic 2018 Coachella set will be viewable right in the comfort of your own home. Scroll down to watch the trailer.

Beyoncé Knowles-Carter is the queen.

With a career that has spanned decades and hit after hit, how could she not be? You'd be hard-pressed to find someone who doesn't love at least one Beyoncé song.

She's pretty much dominated the music industry since she stepped onto the scene.

If you're a youngin', then you likely are most familiar with recent Beyoncé, but the performer's career goes way back.

Beyoncé was born in Houston, Texas.

As a young child, Beyoncé competed in dancing and singing competitions. Clearly, she was always meant for the stage.

But, of course, most of us know Beyoncé as the lead singer of '90s girl group, Destiny's Child.

Who is still a Destiny's Child stan? It's hard to not break out into song and dance any time "Say My Name" comes on the radio or plays at a club. This group will forever be iconic.

Destiny's Child had incredible hits that topped the charts.

But Beyoncé always stood out from the bunch. Don't get me wrong - Kelly Rowland and Michelle Williams are amazing. But after the group parted ways in 2006, Beyoncé's solo career skyrocketed.

Beyoncé released her first solo album while Destiny's Child was on a hiatus. 'Dangerously in Love' came out in 2003.

Her second studio album, B'Day, came out in 2006, which gave us the gift that is the song "Irreplaceable." Not to mention that during this time, Beyoncé was also acting in movies like Dreamgirls and The Pink Panther.

Together, they have created an empire. In 2008, Beyoncé released her album, I Am... Sasha Fierce.  Which, of course, gave us the ever-popular "Single Ladies (Put a Ring On It)."

Beyoncé's career changed after that album...

She took over the management of her career and released her album 4 in 2011. And then, in 2013, she gave us Beyoncé, her experimental visual album. She surprise-dropped it on December 13, 2013, changing the game forever.

When you're Beyoncé, do you even have to promote?

No, you don't. She's just that amazing. This woman is on a whole other level than us mere mortals.

It became the best-selling album of 2016 and garnered critical acclaim. Blending poetry, visuals and perhaps her most personal lyrics to date, Lemonade was undoubtedly a triumph.

In 2018, Beyoncé dropped an album with her husband called 'Everything Is Love.'

As an artist, Beyoncé has sold over 100 million records worldwide.

And even when she doesn't win an award, people think she should've won! Remember the infamous Kanye West "Imma let you finish" moment at the 2009 MTV Video Music Awards, when he interrupted Taylor Swift during her acceptance speech for Best Female Video to let her know Beyoncé should've won? Or when Adele won her Album of the Year Grammy in 2017, and she used her speech to just talk about how great Beyoncé is and how she should've won? "I can’t possibly accept this award, and I’m very humbled, and I’m very grateful and gracious, but the artist of my life is Beyoncé," she said during her speech.

Basically, everyone is a Beyoncé fan.

She is the definition of a trailblazer. She consistently knocks down barriers and is constantly changing and growing as an artist.

Who among us works as hard as Beyoncé?

After all, they don't just call her Queen Bey for no reason. Her cultural influence is massive.

She's been in Academy Award-nominated movies, has her own active-wear clothing line, and has numerous philanthropic ventures.

Her and Jay-Z are arguably the most famous couple on the planet.

Among all of her accomplishments are her unforgettable live performances. She is truly an artist who comes alive on stage.

Beyoncé has given us some of the most incredible live performances.

In 2013, Destiny's Child reunited at the Super Bowl XLVII in New Orleans. Their performance was, quite literally, fire.

Then in 2016, Beyoncé was a special guest performer at the Super Bowl...

But she clearly stole the show. Sorry, Coldplay. Can Beyoncé just perform at the Super Bowl every year?

Beyoncé at Coachella has been a thing for awhile...

Obviously, everyone still can't stop talking about Beyoncé's 2018 Coachella performance...but more on that later. Back in 2014, Beyoncé performed at the music festival alongside her sis, Solange.

And even earlier than that she performed with her hubby back in 2010.

They both look so young! But...alas. Nothing compares to Beyoncé's 2018 headlining act at Coachella.

Where do I even begin with this groundbreaking performance?

The performance was the first time in Coachella history that a black woman headlined the festival.

She had to drop out of the 2017 lineup because of her pregnancy with the twins, but 2018 was her year.

It was also the very first time a Coachella performance was ever aired outside of Coachella's official YouTube stream.

Let's be real: when you're Beyoncé, you're bigger than Coachella. You run the show.

Her set was otherworldly.

With a set list of 32 songs, Beyoncé brought the house down.

The entire performance lasted for almost two hours. Entertainment Weekly described it as "a Broadway-scale production with a 70-plus-person backing band — one that displayed the pop domination of Bey while exploring the full breadth of the Black diaspora."

If you were one of the lucky souls to witness this live, you were probably forever changed.

But as for the rest of us? We wept, knowing we missed out on the singular most important musical performance of the last decade.

A new film is coming to Netflix that offers a behind-the-scenes look at the historic performance.

For anyone who has ever wondered how Queen Bey pulled off her Coachella performance, we may finally have the answers.

The documentary film will be on Netflix on April 17.

The trailer shows snippets from Beyoncé's rehearsals leading up to the performance.

There's also a very cute scene of Blue Ivy mimicking her mother's choreography, so yes, you should have a box of tissues nearby.

Watch the trailer below!

And make sure to clear your schedule for April 17. Queen Bey would be proud. Share this with your Beyoncé-obsessed friends!