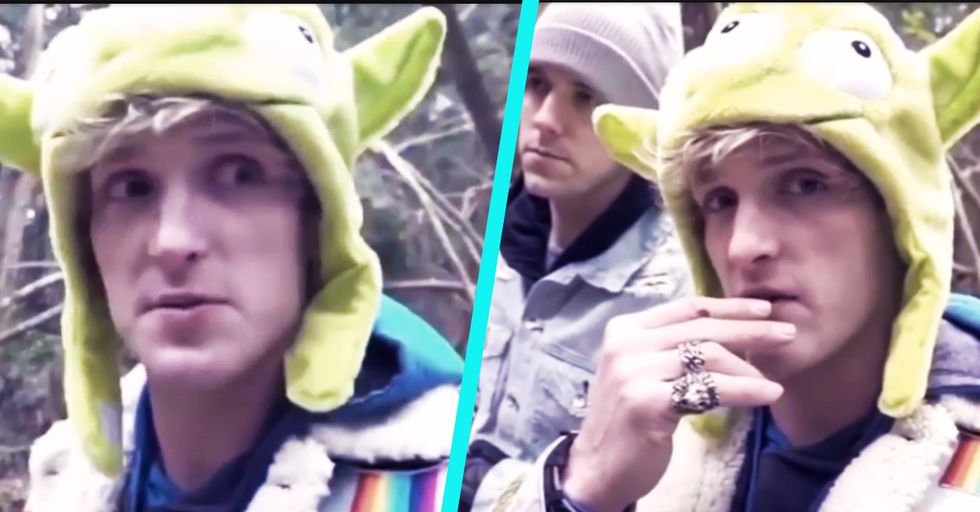 Every year, nearly 45,000 Americans die of suicide. While middle-aged white men make up the vast majority of suicides with 7 out of 10 deaths, a large portion of these deaths is attributed to Generation Z, the population demographic born between 1995 and now.

Not to forget a very important issue in the world, suicide awareness. If you have been triggered in any way by what… https://t.co/vW4gfaym1v
— Joey Graceffa (@Joey Graceffa)1514921341.0

Social psychologist Jean Twenge attributes this horrifying statistic to Generation Z's dependence on technology and social media. Gen Z is the first generation to have never grown up without the internet, and they are also the first generation with constant smartphone access.
This state of affairs has affected them – and not for the better. As Twenge explains in a report for The Atlantic:

Psychologically... they are more vulnerable than Millennials were: Rates of teen depression and suicide have skyrocketed since 2011. It’s not an exaggeration to describe iGen as being on the brink of the worst mental-health crisis in decades. Much of this deterioration can be traced to their phones... There is compelling evidence that the devices we’ve placed in young people’s hands are having profound effects on their lives—and making them seriously unhappy.

One of the most prominent members of Generation Z is YouTube star Logan Paul. At age 22, the former Vine and current YouTube star has amassed $14.3 million a year from his varied pursuits, which include acting and a clothing line called Maverick.
Paul uploads a 15-minute comedy video every day and has had roles in Law & Order: Special Victims Unit, The Thinning, a YouTube Red original movie, and The Space Between Us, as well as the upcoming movie, Airplane Mode, which features a plane full of social media stars.
"I want to be the biggest entertainer in the world," he once told Business Insider. "That's my deal. I'll do whatever it takes to get that. As many hours as is needed." Paul's dreams of superstardom are threatened after this week, however, when he took one of his pranks to such a distasteful, disgusting level, he got the entire internet up in arms.

On Sunday, Paul posted a video in Japan's Aokigahara Forest, a forest at the base of Mount Fuji known as the "suicide forest" for its popularity with people who want to end their lives. Aokigahara is so notorious, it was the subject of the film, The Forest, about an American woman who goes to Japan to find her missing sister.
Paul had been on a tour of Japan, where he had been criticized for mocking the country's culture during his daily 15-minute videos. "Literally this place is content gold," he said at the end of one of his first few videos there.
Paul had decided to visit Aokigahara and highlight its "haunted" aspect.  In fact, he wrote on Twitter the day before he posted the video of the forest – "tomorrow's vlog will be the craziest and most real video I've ever uploaded."
Paul and his cohorts were filming in the forest when they came upon a body hanging from the trees. Paul called to him and asked someone to call the police. Then, however, he began to make light of the situation.
"This is a first for me. This literally probably just happened," he said of the person, whose face is blurred in the video. Off camera, one of his cohorts says: "I don't feel good." "What, you never stand next to a dead guy?" Paul replies. "No," his friend replies. At this point, Paul bursts into laughter. Then, he says, "It was gonna be a joke. This was all a joke. Why did it become so real? Depression and mental illnesses is not a joke. We came here with the intent to focus on the haunted aspect of the forest. This just became very real."

When Paul and his friends gather at the parking lot later, he says into the camera – "the smiling and laughing ... is not a portrayal of how I feel about the circumstances. Everyone copes with s*** differently... I cope with things with humor." Paul further explained he wasn't monetizing the video for "obvious reasons," and added a warning about graphic content.
People on social media weren't buying his shtick, however. The backlash was immediate and intense, although the video had been watched millions of times. Online video personality Anna Akana lost her sister, Kristina, to suicide 10 years ago and she did not hold back.
Breaking Bad star Aaron Paul was also quick to lambast Paul for his video, saying via Twitter, "I can't believe that so many young people look up to you...  Suicide is not a joke."

How dare you! You disgust me. I can't believe that so many young people look up to you. So sad. Hopefully this latest video woke them up. You are pure trash. Plain and simple. Suicide is not a joke. Go rot in hell. Ap — Aaron Paul (@aaronpaul_8) January 2, 2018

Others also had more things to say.

I always hated Logan Paul. Logan Paul is pure garbage. How that piece of shit has any fans disturbs and baffles me. Can this guy just go away already and be forgotten forever?

can people stop playing on the fact that « error is human » about the whole Paul Logan thing ?

Yeah error is human, so maybe his mistake was to film during his discovery but EDITING the video, PUTTING IT ONLINE, and EVERYTHING ELSE are not errors. pic.twitter.com/zHJdyFxo86 — coralie♡hyunbin (@OFFlClAL_JBJ) January 2, 2018

Laughing during terrible events is not uncommon, it’s an odd coping mechanism. It’s more like you’re in total disbelief. However laughing while filming yourself and a victim who was suffering and now deceased AND POSTING IT, boy that is fucked up Paul Logan. Get help

Things that we should leave behind this 2018:

@LoganPaul You’re an idiot. You’re not raising awareness. You’re mocking. I can’t believe how self-praising your “apology" is. You don’t deserve the success (views) you have. I pray to God you never have to experience anything like that man did.

logan paul should’ve stopped filming the body when he realized it was a suicide, but instead he kept zooming in on the body and used it as clickbait, i’m so sick. suicide is a serious issue and trying to use it for views is disturbing and disgusting.

Hey Logan Paul, You want to be the first social media billionaire? By exploiting the death of a troubled youth? Take a long hard look at what you are doing with your popularity young man. Find a mentor and perhaps log off for a moment. @LoganPaul #beahumanfirst

Movie reviewers get their videos demonetized for no reason.

Logan Paul films the hanged body of a suicide victim and his channel is fine.@YouTube... are you for real? — Chris Stuckmann (@Chris_Stuckmann) January 2, 2018

Paul attempted to smooth things over with an apology, saying

I didn't do it for views. I get views. I did it because I thought I could make a positive ripple on the internet, not cause a monsoon of negativity...I intended to raise awareness for suicide and suicide prevention and while I thought, 'if this video saves just ONE life, it'll be worth it,' I was misguided by shock and awe, as portrayed in the video.

Of course, people weren't enthused by this either.

Logan Paul's apology letter amounts to: - I didn't do it for success I'm successful already - I laughed at that dead body and zoomed in to raise awareness - I make too many videos to think about what I upload

Ooookay, I just found out about Logan Paul and he's a fucking bastard. If he thinks that suicide is funny, than why doesn't he try it? And he really thinks that piece of garbage apology letter will get him out of the trouble, he can't be further from the truth. Screw you, Logan.

I’ve been trying to comprehend this whole Logan Paul thing and I just...I’m so infuriated and disgusted. Even his apology letter isn’t an apology for the video. I actually feel like I’m gonna throw up. Suicide is not a joke and Aokigahara is hallowed ground how dare you.

After hearing what Logan Paul did, I'm fucking disgusted. Suicide isn't a fucking joke. I have lost 3 people to suicide and here he is just casually filming a hung dead body. And people are fucking defending him? He shouldn't have to release an apology letter in the first place -

Honestly, hearing about the Logan Paul fiasco was horrendous. Reading his apology letter to the public was worse.

The government officials in Japan do not permit you to record or take pictures in the Suicide Forest. Also, how much of a prick do you have to be to»» — Damian? (@DearHeavxn) January 2, 2018

take away that man's peace of mind after life? I don't think my soul could feel at a better ease if someone was recording me moments after death. Also that is technically humiliating the man who committed suicide, recording his body the way Logan did. I get he tried to»»

Fuck you. Fuck #logang4life. And fuck your apology letter. You’re a pathetic abhorrent human. Hey, it won’t happen again though. You don’t have “great power" you have a YouTube show. Get over yourself. Sincerely, The sister of a suicide victim...who hung himself https://t.co/V3tk8pjGtF — Caylee (@_Cay_B) January 2, 2018